What will go first?

After Brexit when the EU human rights act no longer applies what will be the first thing Mrs May's government will get rid of. My first 3 are:
1. Minimum wage will be dropped for organisations employing less than 50 people.
2. Paternity leave will not apply to such organisations and a man will need to work for 5 years before beeing entitled to any.
3. Maternity leave will be restricted in the same way.

MaizieD yes, you were lucky in he NHS, private sector only pays what the government insists upon with only very rare exceptions. In s many ways the public sector is protected in ways those in the private sector can only dream of.

My point, ab was that what Corbyn wants to introduce, apart from the fact that it's for men, is not novel.

When I was on maternity leave in the 70s I seem to recall that I had 6 months full pay and 6 months half pay. Was this just a generous NHS 'thing'?
Yes, MaizieD it certainly was.

Those who were inveigled into paying the Married Women's NI stamp received nothing whatsoever; those who had paid the full stamp received varying amounts. I cannot remember the minimum statutory pay.

Many women were routinely sacked for becoming pregnant till the late 1970s.
The UK introduced its first maternity leave legislation through the Employment Protection Act 1975, which was extended through further legislation, such as The Employment Act 1980. However, for the first 15 years, only about half of working women were eligible for it because of long qualifying periods of employment

Sorry, other reports state that it was 1993
^ In 1993, coverage was extended to all working women^

There was some form of maternity pay in the 60s when I had both my children. Because I was teaching I always needed to pay graduated pensions to earnings related pension and I think it had something to do with that. I was quite surprised when I received a payment book like the old family allowance books.

When I worked for the NHS we were inveigled into paying the Married Women's Stamp.

Maternity payment was introduced in Sweden in 1931. Things have progressed since then and today mums and dads get 3 months paid leave each and a further 300 days to share as they see fit. It is taken for granted that parenting is a shared responsibility. Today we tend to have fewer children. The first couple of months after a child has been born are precious. The Swedish dads I have spoken to say they found it very rewarding to be able to spend time with their child/children. We all know how quickly they grow up. In the UK we don't seem to value families and I find that very sad.

I think we can gather from this thread those who haven't the will to see these things through. We can only hope that the younger generation see things differently. (I know my DSs do)

I think the younger ones are far more switched on and this is where hope lies.

But how will their voices be heard?

well varian, it might not be peaceful in my opinion.

I fear you may be right oldbatty . So what can we do?

Well, I'm not placing any bets on the predictions in the OP.

But
I think we can gather from this thread those who haven't the will to see these things through. We can only hope that the younger generation see things differently.

Why should people who are in their 70s and 80s, perhaps 90s (who knows how old most of us are on here?) carry on battling? Have we not done our share of battling?

Should it not be the younger generations who should take up the baton now anyway?

Why should people be the subject of derision because they have handed the reins to the younger generations?

Ageism has become another ' useful tool ' to cause division over the last few years that's a certainty.

I do wonder if compulsory euthanasia will be introduced when the millennials are in charge.

*Welshwife" I don't think there was maternity pay in the 60s for most of us, I think you were another one who worked in the public sector and had privileges the rest of us could only dream of. I got nothing in 1971 and even had to take holiday for maternity appointments.

There was Maternity Allowance from 1948. I think it was only payable if you had paid the full stamp, those who opted for the married woman's stamp were not eligible assets.publishing.service.gov.uk/government/uploads/system/uploads/attachment_data/file/222912/MaternityAllowance.pdf

I think that could well be right Nonnie - I was amazed when I got anything at but it gave a great boost to our finances! The equal pay for women teachers had only just become reality.

I did always pay the full stamp - married to an accountant who said it was a good deal! 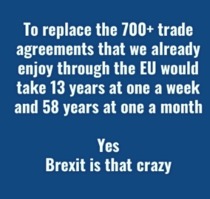 How many people would have ever voted leave if this had been clearly explained to them before the vote?

Why would we want to do such harm to our country?

never had maternity pay or leave ...I was self employed.Back at my desk when my daughter was 8 days old .I think it brilliant that women can get time off with their newborns ,I think a year is a lot for a smaller firm to cope with

I don't think there will be much change in existing legislation, changes in women's legislation would have an immediate effect on voting so that is a no-no. Future changes may well be trimmed but it is not that simple a lot of Human Rights legislation is not EU rules at all . Try this link for more explanation.

Varian
Yes it is that crazy and nobody has the faintest idea how it's going to be achieved.
More than that they are 2 way deals, many will be reciprocal some won't and be traded off against another area.
This is exceedingly complex and if it is conducted in an atmosphere of confrontation, a style Trump might take I can guarantee the UK will loose out.

Do you feel you have aged since the pandemic

Are you still wearing a face mask?