The sad fact is that the only "world beating" statistic we can claim is the number of deaths, many of which could have been avoided if we had a competent government.

Another world beating achievement, Sterling is bumping along the bottom of the exchange rates, we are doing so much worse than other countries. One thing for sure we have a world beating buffoon as PM, he may still be below par due to virus, no excuse for delusion.

Who cares whether we have a “world beating” track n trace system? Surely better to have one that actually works?

Boris Johnson should stop this hollow boasting. He has nothing to boast about. Even if we make allowances for the fact that he's been ill, he and his special advisor could hardly have done a worse job if they'd tried.

Almost, but not quite (yet) a world beater 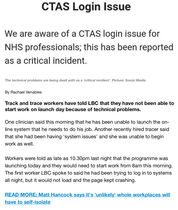 And this world beating system isn’t even working!

Why should anybody give it a rest Jabberwok? Aren't you brave or resilient enough to face the truth?

I don't care if our system is 'world beating'. I just want one that works. It's no good lauding and boasting about a system that isn't even up and running properly.

Can someone please explain why GNers feel it necessary to go onto a political thread and then tell everyone to give it a rest. I suppose it's like an itch that they just have to scratch.

Several posters do that on threads about the royal family !

Here is the experience of one of our "world-beating" team-

"Boris Johnson tells Britain that our test-and-tracing system will be “world-beating”. Here’s what I’ve witnessed from the inside. In March, I was furloughed by my employer. The financial impact was huge, and I decided to look for some temporary work to help with the bills. I saw an online ad for a temporary “customer service adviser”, which said: “You must have your own computer and high-speed internet to download our software and communicate with our customers … Don’t let lockdown stop you getting your dream job.”

I have some experience in customer service, so I applied, and was then telephoned by someone who asked me some basic questions about customer service. He said my answers were great, and proceeded to tell me the role was working on the government’s new track-and-trace programme. They would like to offer me a role, and I could start training the following Sunday.

On my first day, I logged in and was put into an online chatroom with my new colleagues. There were about 100 of us, and it was soon pretty clear that people were having problems accessing the system correctly. Our trainer dipped in now and then, saying the training would start in 10 mins – 10 mins later, they would repeat the message. Nearly two hours later the training began, but people were still having problems – at which point they were told there was nothing more they could do. I checked my schedule and saw that I was due to start the next day at 9am. Panic set in. The training was very basic. We saw some slides about our role – the public health website we will use, and a script for what we had to say to people. We were told: do not go off-script, and if there was anything we could not answer, we should ask our supervisor.

The training was wrapped up early, and we were asked if we felt prepared. There was a chorus of no from many people. Some said yes, but I didn’t see how anyone could be prepared for something they’d only found out about a couple of hours ago, plus we hadn’t even accessed the specific programmes. I checked my schedule and saw that I was due to start the next day at 9am. Panic set in.
The trainer told us there was a further seven and a half hours of self-led training that we had to complete before “going live”. This seemed a little unfair, if not impossible to achieve by the next morning. We were reassured that we could probably get through the training in two to three hours – but we would be paid for all seven and a half.

The trainer declared the training over and was immediately inundated with more questions from those anxious about what to do and when. The chatroom was then closed by the trainer, and we were left on our own. The self-led courses were very basic – with some generic dos and don’ts about customer data, security and so on. I completed it all in less than one and a half hours, with a score of 95%+. The next morning I was worried, and feeling very unprepared. I felt the job was an important thing to do. But it was essential to get this right, and I didn’t really understand the role and how to use the systems. I logged in and saw a message saying I would be invited to a chatroom and to please wait. I waited seven and a half hours (my entire shift). I called the HR helpline after about one hour and was told to relax – everyone is waiting."

Probably posters urge others to give it a rest because so many of us are heartily sick of the same few names churning out thread after boring thread day after day all rubbishing the government.

Honestly the hours some of you must spend trawling the Internet and newspapers desperately searching for something else to be outraged at.

Today Johnson said that he was proud of the UK response. How did he manage to come to that conclusion? I

We don't have to trawl anything, JE. It's there on the surface, right under our noses just ready to be picked up.

Perhaps if the government weren't making a pig's ear of everything then people wouldn't feel the need to make negative comments.

JE. Would you prefer no discussion of political situation ?
I honestly don’t think this forum would at all interesting if everyone just came on and said “well done Boris you’re an excellent chap“. “Hurrah for Brexit”.

Well, if it's so comical, go and have a laugh about it JenniferEccles. Nobody's forcing you to read the threads.

Personally, I don't think unnecessary deaths are a laughing matter, but each to their own.

Can I add another "give it a rest" from me too. Why must you endlessly criticise everything the government does. Don't you realise there are likely to be teething problems whenever a new system is up and running.

Teething problems should have been sorted out before the announced date of starting.

I'm sure there are a lot of threads I may dislike or find boring or ridiculous.
I don't bother asking posters on them to give it a rest.
What would be the point of that?

We criticise this appalling government for very good reasons. Thyw have let the British people down.

Even if you voted for them, how can you possibly defend them now?

They have let the British people down.

I think Gagahnan must be having a joke to ask why are we criticising the government, you only have to listen to the afternoon briefing to know why. Worse government we have had and hopefully Boris won't last.

Nodding off quite a lot... should I be worried?