Trump is using "crowd funding" in order to help pay off his debts.

Trump spent $1.6 billion on his election campaign, apparently more than he could afford and now is asking for help to cover his debts. The following is an excerpt from a piece in the Guardian today, written by Poppy Noor

"As Trump continues to refuse to acknowledge the election result by baselessly claiming that Biden’s victory was won through voter fraud, he is also calling on his base for help. Donations can be made to two different funds – Trump’s personal fund, and his joint fund with the RNC.

“President Trump needs YOU to step up to make sure we have the resources to protect the integrity of the election!” the wording on both funds says, which is featured in a huge pop-up on Trump’s re-election webpage. It continues: “Please contribute ANY AMOUNT IMMEDIATELY to the Official Election Defense Fund and to increase your impact by 1,000%!”

It is unclear who matches the donations.

But if you scroll down, past the information about the “Left-wing MOB” trying to “undermine our election”, you’ll see some fine print. On Trump’s personal fund, it dictates that of all donations raised, only 50% will go towards a recount effort, and that “50% of each contribution, up to a maximum of $2,800 ($5,000), [will] be designated toward DJTFP’s 2020 general election account for general election debt retirement until such debt is retired”. "

The man is seriously deranged!

Just to add, some of his supporters might need a bit of assessment too.

Also, if he's been such a successful business man, as he has often said, then why does he need Joe Public to help him out?

He could always sell off a golf course or two.I think Turnberry would shed few tears to see the back of him

Also, if he's been such a successful business man, as he has often said

Yes two Scottish golf courses would be very pleased if he sold up along with some very happy locals. Just hope he doesn’t “retire” over here.

So that's where Farage picked up his ideas for fund raising?!

Watch out for Nazgul and Orcs ..

If Trump has to leave the USA for any reason he will probably end up Britain! 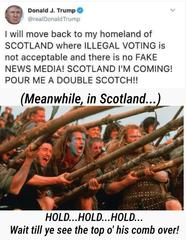 Trump may try to come back to his ancestral roots.😱

The hardcore red necks really do think he is the new Messiah, he will raise a millions, they will be well short of the $1.6 bn he needs

.NO Scotch available for him after he stuck 25% Tariffs on it .Hopefully Biden will take it back off ,I know he has Irish roots so its not a given he might favour Whiskey over Scotch .

The fake news media is alive and well here too ,watch the good old BBC and find out how fake it is about all things Scottish !

There are a few that listen to different, liberal drummers- Occasionally-

I get tired of them saying everyone can be, and remain, at the top of their game- But that's what Conservatives preach and believe- That everyone enters the game with equal advantages- They don't- But will donate their last red cent to hear anyone repeat that untrue mantra-

They elected a sick man, each for their own sick reasons- And called him hope- What will all the thousands of little, conservative, crime ridden, drug infested towns do without their idiot in the White House?

Will they ask themselves why did I give him my last dime? Nope- Now that they tasted each other's hatred, and liked it, they will put their pig like snouts to the ground and hunt down a second coming of Trump or Trump like animal-

‘They tasted each other’s hatred and liked it’. What a terrifying but true statement of what the past few years have been like in both of our countries.

Should he decide to come and live in Scotland, St Kilda, with no means of getting off the island, would be the ideal location for him! It’s certainly not a case of Haste ye Back though!

I think it is time that he was tackled. If he is planning something then in my view it is better stopped at the beginning before too much damage is done to the democratic process.

So how come Diane Abbott uses it? People of colour?

It is a correct term.
I don't like it particularly but it is in use and not politically incorrect.

It’s like a religion - some people idolise a leader and are completely blinkered!

So how come Diane Abbott uses it? People of colour?

It is a correct term.
I don't like it particularly but it is in use and not politically incorrect.

If there were a set term I would adhere to it, but in the US there isn't one- Person of color, African-American, brown, black- All work- Respectfully-

It’s ok to say person of colour. But to call someone coloured is wrong. Personally I find it hard to see the difference. I prefer to say black, Asian etc (if you really need to specify their ethnicity that is)

Not answering the door when someone calls