It has never been my intention to cause upset to anyone.”

Is not an apology it's an expression of regret. As such it is ambiguous. Patel was sorry she had made herself unpopular.

If Patel was truly apologising she would have taken responsibility for her error, and tried to make amends.

To be fair though, she is not the only politician to make that sort of ambiguous statement.

Do you think she cares if she is unpopular? As long as she still has the backing of Boris Johnson she is secure.

Of course she cares when her work is made harder by adverse public opinion!

But maybe she doesn’t care enough....

Does there have to be an element of intent in bullying?

With what most of people understand by the word I would say yes.

School bullies aggressively targeting a fellow pupil is intentional, whether it takes a physical or mental form.

Ms. Patel is a tough cookie who probably has set high standards for those who work for her so maybe there are times when she has to speak rather sharply to her staff.

Too many people these days seem to want to jump on the ‘I was bullied’ bandwagon.

She has said she had no intention of upsetting anyone so it should be left at that.

I am pleased the PM has stood by her.

If you have shouted, sworn and made staff cry it’s sort of tells you that you are upsetting people intended or not. I think she should of been sacked horrible woman.

JenniferEccles I don't think it is easy for grown men to admit to being bullied, so I really don't think they are jumping on any bandwagon.

Pritti Patel said that she didn't think she was being a bully, perhaps she is just not a good manager.

I would imagine Priti Patel exerts control by 'the force of her personality'; she strikes me as being a formidable woman, which is not the same thing as being a bully.

“Unintentional bullying”? Does that mean you are too arrogant or thick (skinned) to care what effect your behaviour has on others?

Reminds me of when I was told how to "apologise "at work, say "I'm sorry you're upset!"

I thought that sort of "apology" was classed as passive-aggressive, isn't it?

I think that it's not unreasonable to expect that a cabinet minister would be fully aware of the impact of their behaviour. Most managers would have had training in all areas of people management, plus their legal responsibility.

A thoroughly weasley apology by Priti Patel. One of the 'I only did it for your own good' apologies and transparently so. Full of righteous self pity. If she had to do this kind of apology she should have it done in a much more subtle way. Once again demonstrates her utter disregard for us ordinary people.

Wheniwasyourage, you are dead right, it is passive-aggressive.

I have worked with women (and men) like this in the past. Nasty bits of work and it is all done deliberately and knowingly. Not realising what she was doing? balderdash!

It’s what politicians do quite frequently as Ilovecheese points out.
It’s what Jeremy Corbyn has just said.... he apologises for any ‘hurt’ caused.

It’s what politicians do quite frequently as Ilovecheese points out.
It’s what Jeremy Corbyn has just said.... he apologises for any ‘hurt’ caused.

It doesn't make it right.

Corbyn hasn't had the whip restored.

complaints of how she speaks/ shouts /bullies staff have come from all the depts she worked in.

She upsets me every time she opens her mouth. At least she's consistent. She's horrible to/about everyone unless she needs them.

Up to Johnson as to whether she goes or stays ( she does come across as a difficult type) but the civil servant who now heads the dept says they work together well ( apparently.)
As petra says, it’s hard for anyone to know the exact truth. bullying can be perceived as that by some and not by others.

As petra says, it’s hard for anyone to know the exact truth. bullying can be perceived as that by some and not by others.

When accusations of bullying are widepread, wherever the person accused has worked, then you can be pretty sure that bullying is occurring, and it is not just some sensitive souls getting upset.

Remember she was accused of bullying behaviour, not that people 'felt' she was bullying. It means those who were not brow beaten could quite clearly see that she indulged in behaviourtowards them and othersthat was clearly meant to bully even if they were able to standup to her. They could also see that junior staff found her intimidating. 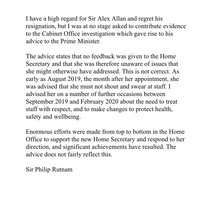 Perhaps I should post this here as well as on the other thread. Statement issued by Sir Philip Rutnam today. Patel was not unaware that she was bullying

MaizieD Thank you for posting this. it confirms my every belief on this subject. Priti Patel is a bully and that has been in the public domain for a long time. This report confirms this officially.

Why hasn't she been sacked, or why hasn't she resigned? Because the Prime Minister is a lying braggart who probably approves and admires her behaviour.

Nothing to disagree with there, MOnica

Yes, that certainly sounds like bullying behaviour, the same
Sort of behaviour that Bercow indulged in by all accounts.
No doubt she won’t be behaving that way again, after all this.
It’s Johnson’s call what happens next, but there will be a re-shuffle after the end of Jan ( so I read) so she may be shunted sideways.

Just seen this. I think it sums up the situation pefectly.

'I apologise if my behaviour has upset people' is not an apology.

'I apologise for my behaviour" is an apology.'

I am very concerned that the author of the investigative report has resigned (?sacked ?gently nudged out). When we get to the point that objective findings of enquiries lay their author open to sacking we are in a pretty bad way.