Brexit is fast becoming a disaster

HMRC have published some figures to show that food and drink exports fell by 2bn in the first 3 months since Brexit.

Dairy was down a massive 90%😲 and there were losses across the board.

The figures show that rather it being a teething issue as the Tories would have us believe it is in fact structural and likely to continue unless there is some sort of move towards say the SM.

So was Johnson, Frost, and many more!

The Times was always pro Remain. So no change there.

Brexit is the elephant in the room

I wonder if the person who put that picture together has been reading GN, vegansrock.

I love the picture, thanks vegansrock

I think it's just a script they all stick to, Pippa. It's rife on twitter, too...

I wonder if the person who put that picture together has been reading GN, vegansrock.

I see The Times that champion of Brexit is beginning to change its mind. It is still in the stage of it’s not all Brexit, but is now saying something that was unthinkable just a few months ago, that Brexit can be blamed for some of our problems. 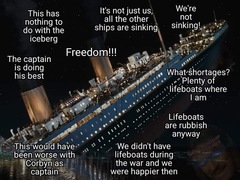 This get it right! Didn’t Johnson say Brexit would be a titanic success?

How we have dropped so low from a respected country to a den of thieves and liars that no-one, not any country in the international community can trust.

Prof Dougan of Liverpool University, who is probably the most knowledgeable person in the UK re international Deals and negotiations, warned very clearly about the dangers of the Deal Johnson and Frost signed.

He still is, and his analysis clear as a bell

''As usual, when Johnson speaks, he lies... but also manages, despite his carefully managed stage persona, to reveal some hidden truths. A good, and very telling, example from today's prime ministerial musings:
One hand: Johnson claims current problems are part of "necessary" post-Brexit transition. Rubbish. Johnson's Leave cabal chose & designed this Hard Brexit & its inevitable problems. It could've been very different if they had made less extreme choices. None of it was "necessary".
By the way: Truss claims it's not Gov's job to sort these things out; we're not "command & control" economy. Utter drivel. Tories' Hard Brexit was ultimate act of "command & control": Gov actively imposing vast changes upon economy & society in pursuit of ideological (own)goals.
Other hand: Johnson claims when people "voted for change" in 2016 and 2019, it was to end a "broken model" of low skills/low productivity. Thereby admitting they voted for a big fat ugly lie: EU membership didn't make UK economy that way; UK government policies made UK that way.
Plenty of EU member states don't have "broken models" of low skills/low productivity. EU membership didn't cause the "problems" Johnson claims people voted against in 2016 & 2019. So leaving EU won't make any particular difference to solving them. If anything: quite the opposite.
But at least we've heard it from the pantomime horse's own mouth: Johnson's "victories" of 2016 & 2019 were motivated by problems caused by UK government policies, which had little to do with EU membership, but that he thinks his Brexit will address with "economic shock therapy".
What a pity Johnson can't help embellishing his propaganda with trademark Tory xenophobia: insinuating the nasty, offensive, provocative lie that "EU immigrants" were the real driving force behind the UK's "broken economy". In any decent society, a man unworthy of public office. ''

Tearing up the Deal negotiated and signed, and which was crystal clear, every single word- beforehand- and the warnings from experts that it would have real and devastating consequences - would leave the UK totally isolated, with all Ports and a large % of utilities and services owned by the very ex partners this would alienate, at the worst possible time. And the 'word' of the UK more distrusted than ever - perdid Albion indeed. 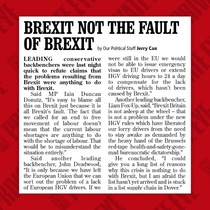 So now we see that lots of other people are being “encouraged” to come to the U.K. to help dig us out of the Brexit mess we are in.

So shortage of lorry drivers has been partly blamed by a world shortage, but of course has hit the U.K. worse because of Brexit.

To name just a few.

I wonder how the world is managing without it being an apparent crises with their governments running around like headless chickens in total denial.

It hasn’t tanked then Mamie (as forecast regularly by some on here!).

Well, as the Brexiters keep telling us, its early days.

We really are led by donkeys.

Kwarteng: “I think that’s a perfectly legitimate question, and when I answer these questions I pivot back to the Prime Minister’s ten-point plan, The New Decalogue as he calls it.”

ConHome: “That was a satire.”

It makes you want to weep - except it's worse than that. We only have politicians running this country. There is not one capable administrator, particularly at the level we need them to be, in the whole government, as far as I can see.

It hasn’t tanked then Mamie (as forecast regularly by some on here!).

She is also a regular panelist on J Vine - they must have balance of course. She is shouty, loud mouthed and opinionated and very pro Brexit.

And many of those young Brits who travel to far flung countries have rarely travelled in Europe and so not seen all the wonders that are closer to home.

I think that is a rather arrogant point of view. When we had our young family we could not have afforded holidays far afield, i.e. outside Europe. However, I would never say that our children 'missed out'. It was so easy to travel within Europe and our visits to Germany, France, Holland, Belgium, Switzerland and Sweden have enriched them.

Holidays are very different to 'living day in, day out'

for those of us who live abroad, the uncertainty is very stressful. Forecasts are that as Brexit continues to create massive problems to business and industry, it could go down very fast, and very quickly. As for foreign HGV drivers- who sacrifice family like and comfort to go abroad to be able to help their family, and perhaps buy a little plot of land at some point- they are much more interested about currencies with a better and more secure exchange rates (never mind the conditions, which are better there too).

Exchanges are the cheapest, as food and accom is on a shared basis- and they can't happen if the pupils/students from abroad cannot come on the UK leg.

Well I can tell you who is going to miss out on visits to the UK- school children, and families. I used to organise lots of trips to Europe, some exchanges, some trips staying in Hostels, etc- to both France, Germany and Austria. We worked so so hard to make it as cheap and affordable to modest families, and found ways to subsidise partly or totally those from poorer backgrounds. Adding the cost of a passport will just make this impossible now- especially with Sterling being so low and possibly falling lower still.

Stupidity is far from being a barrier to the job of writer for the Express, Mail or Sun - it is a positive advantage.

What have you finally made peace with?