The Home affairs select committee have found that the police have systematically failed to improve their record on race.

The Prime Minister alongside Patel, has seen fit to relax the stop and search laws, section 60 1994 Criminal Justice and Public Order Act.

Under this act black people are 18 times more likely to be stopped.

Going against the findings.

But the biggest problem facing the police in urban areas is black on black knife attacks and many murders www.mylondon.news/news/zone-1-news/6-more-fatal-stabbings-london-20841707

How do you suggest the police deal with this immediate problem?

I am not talking about long-term changes that are needed. Noeither am I disagreeing with what you have said, especially about drugs, but drugs are not the main problem. Knives are.

I have quoted the findings of the Home Affairs select committee.

Perhaps they have done a report about knife crime?

The problem is SYSTEMATIC RACISM. Not drugs or knives.

Yes, the stop and search programme is about stopping knife crime, mainly black on black and usually gang related.

I agree it must be rotten to be stopped more often if you happen to be black.
No easy answers if we want to stop all the knife deaths.

Yes, the stop and search programme is about stopping knife crime, mainly black on black and usually gang related.

I agree it must be rotten to be stopped more often if you happen to be black.
No easy answers if we want to stop all the knife deaths.

That is NO WHAT THE REPORT said.

If black youngsters are more likely to be carrying a knife either because of the macho culture or fear of others stabbing them, then that’s why they are stopped more often than white youngsters.

You mentioned stop and search trisher which is what I have replied to.

If you hear a dull thud it is me banging my head against a brick wall.

Whitewavemark2, I can see what you are getting at but there is a conflict here between the need to make sure that all people are treated fairly and equally by the police and how to deal with a serious type of crime that is more prevalent in one ethnic group than any other. This is why I asked you whether you have any ideas on how this conflict can be resolved.

We have already seen in Rochdale, Oxford and other cities the problems that arise when one crime, in this case the sexual exploitation of young girls, is more prevalent in one ethnic group, than others and the damage done to so many troubled children by the unwillingness of the police to investigate properly because of their fear of being accused of racism.

There is a real problem here and there is never the simple cause and effect in these problems that you seem to see. Yes, there is undoubtedly racism in the number of black youths/men stopped and searched but person on person knife crime is also highly prevalent in this group. What do you suggest could be done to bring together these conflicting problems. 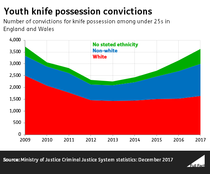 This does not appear to support your claim

Maybe if their were more ethic minorities in the police forces it would help with general policing.
www.ethnicity-facts-figures.service.gov.uk/workforce-and-business/workforce-diversity/police-workforce/latest

Totaly agree with you Lemongrove.
The majority of knife crime is black on black,it`s in/on the news,take a gander on youtube and see the videos of court hearings.

The Police are walking a fine line. If there are knife or abuse crimes relating to particular minority groups then they have to stop people from those groups in that area. Should they not search those people and let the criminals get away, or search them and be accused of racism? This has been a problem for years and has indeed resulted in criminals getting away with terrible crimes.

The graph shows knife possession, not stabbings and murders.

The graph shows knife possession, not stabbings and murders.

Yes that’s right, but I suppose one can’t be carried out without possession of the other.

But which group are the ones carrying and using, rather than just carrying?

But which group are the ones carrying and using, rather than just carrying?

Figures show only knife related crime, but not by ethnicity.

So I don’t know the answer - I am sorry.

PS the latest report is year ended Mch 21, but of course is untypical because of lockdown.

It shows a big drop in certain months coinciding with lockdown.

If we are going to stop people because of a particular characteristic then the overwhelming marker for violent crime is sex, so we should be stopping all males, I presume people are comfortable with this.

If we are going to stop people because of a particular characteristic then the overwhelming marker for violent crime is sex, so we should be stopping all males, I presume people are comfortable with this.

There is a thought.

Surely many more males are stopped and searched as opposed to females?

The issue I see is that cited statistics and overall conviction rates etc are underpinning the institutional racism at play. One could argue that if young men who are not white are 9 times more likely to be a target of stop and search, then all these statistics are proving is that the numbers of convictions/arrests are a direct result of that specific population being targeted. Not that there are fewer white men actually breaking the law - they’re just more likely to not get caught because it’s less likely that they’ll be stopped.