The Rage of the Incels

The man involved in the recent shootings seems to have been a self-described "incel".

I have written about this group previously. This man posted videos openly lamenting his virginity, with his social media accounts suggesting an intense interest in the online “involuntary celibate” subculture. When you read about this group they appear to be misogynists who see male supremacy as their right.

One of the reasons for not making membership of this group a terrorist risk is that it will That would involve diverting resources or putting resources into it. There have been more such shootings in America.

What do you think? Is this group a terrorist risk?

I heard something on the radio about this - rage against women who’ve rejected them - presumably meaning women who won’t sleep with them - turning into war on women in general.

definitely qualifies as terrorism
no excuses

Mr sallywally and I were talking about this today. I think there have always been such men around, mysogonists, men who have raped women because they hate them (think of the Yorkshire Ripper). Rape has never been about sex. Men who are unattractive to women, usually because of their views, not their looks. Men who are violent. Nowadays though because of the internet such men can form groups where their sense of entitlement coupled with their sense of inferiority, their rage and their frustration is fired up. They may still be loners but on these sites there is a group of other men who feel the same and with whom they can identify. A dangerous mix.

I genuinely don't see why they shouldn't be classed as terrorists, to be honest. When you actually delve into the whole 'incel' culture, it is terrifying. As others have said, when once these men would have simply been sad loners, now - with the internet and social media - they have become part of a 'movement' with other like-minded loners and fuel each others' rage and fantasies. It's a worrying mix.

I hadn't heard the term until the terrible events unfolded in Plymouth, thought it had something to do with computers then I realised mistaking "incel" for intel.

Truly awful to wage a war against women based on personal grievances, and what of the women who have been rejected by men?? Rejection is a fact of life that happens to many somewhere along life's path.....but then these aren't rational people. How social media drives along such hatred and magnifies it amongst those who inhabit the darkest places on the web. Misogyny it seems is a factor in all societies, there is always a scapegoat to attach perceived injustices of life and that person is inevitably a woman/women. Too easy to deflect their own inadequacies on to the female sex instead of coming to terms with their own shortcomings.

Terribly sad to read about those innocent people who were murdered, a little girl among them. What a wicked act.

Florence Keen, who researches incels at the International Centre for the Study of Radicalisation at Kings College London, says that one of the biggest forums has 13,000 active members and around 200,000 threads.

"The caveat I would always give is that we can't say that the whole of the incel subculture is violent," she says.

"It really varies. Some will glorify violence while others [in these forums] will say 'this is not what we are'."

I’ve been aware of this for about five years. There have been many ‘shooters’ in the US who were self-confessed Incels.

I have also been aware of these men , they are extremely angry at the world particularly females.

They blame all females for their own inability to get a date/get laid. incel is an abbreviation of involuntary celibate

I have never heard of the group called incels before although of course I ve heard of ‘women haters’ as others have said
Just a new name and a more easy tool for ‘feeling normal’ like child abusers using the internet to find ‘likeminded friends’
I wonder why he’s shot men and a child and not just women he sounds a very mixed up young man and his poor mum has probably had a bad time with him growing up
We have pretty tight gun laws here maybe they need to be even tighter !
Very very sad all round

I think we have a stereotypical image in our head when we hear the word 'terrorist'. The gunman in Plymouth may not have been Middle Eastern or Asian but he was a terrorist, nevertheless.

Thanks, Pippaz, for the link to that article. It seems that Davison's opinions were no well documented and surely his tendency towards violence must have been known to the Police who, nevertheless returned his firearms licence. I hope the inquiry into this lapse will pull no punches.
It's notable that he sought out and shot his mother, presumably deeming her responsible for his lack of appeal to women in general. No doubt much will be said and written about this relationship when this case is chewed over by the press. Clearly, we haven't heard the last about incels in general and this terrible bloodbath in particular.

I had never heard of this group until yesterday. My instincts told me it would be bad, and thanks for making me aware that it is terrifying. After reading the comments about it, should definitely be put in the terrorist group. Poor poor people, that little girl. Just horrifying.

What they 'preach' and 'stand for, most definitely should be labelled a terrorist group. They should also be labelled a 'hate' group. I can not for the life of me understand why they have been allowed to exist on social media outlets when a one liner by someone on certain subjects, which I might add come under the 'sticks and stones' saying can have the police banging on their door within hours! I believe the police are not referring to it as a terrorist attack and calling it 'domestic' is because once again they have failed in their duty of which there can be no apology.

There have always been men who were socially inept and awkward and didn't have partners. But the advent of social media has given those loners a 'community' and a platform and heightened their sense of grievance. I have heard of incels and there was a dreadful case in Canada not that long ago. It's hard to know what to do as the internet is here. The genie is out of the bottle.

Thanks Pippa for starting this thread. It is of course terrorism, and the fact that they refuse to class it as that is down to further misogyny. 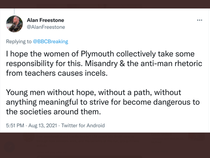 This has just come up on my Twitter time line…

What ???
Anti man rhetoric from teachers ?

Who is this person ?

He thinks you can treat autism with homeopathy and is a climate change denier.

Says it all, I think.

What ???
Anti man rhetoric from teachers ?

Who is this person ?

If this is how a section of the male population think (not just here in the U.K.) how can women ever feel safe?

He thinks you can treat autism with homeopathy and is a climate change denier.

Says it all, I think.

I agree that to us he appears odd in his thoughts and probably behaviour.

How many other men/boys share his views on incel forums?

Do they encourage their members to carry out violence towards females?

I don't know enough about Incels or the culture to comment. (I realise "culture" is the most inappropriate word in these circumstances)

I've heard (and I hope it's right) that misogyny may be classified as a hate crime. Not before time, either. If so, I hope it will move it up the agenda for the police, media platforms and other agencies to take action as soon as someone is identified as hating women.

Yesterday I baked a cake...