So a new law for men who emotionally bully partners with coercive and controlling behaviour is being introduced today. Very very welcome (I speak from personal experience). This type of abuse I deem as emotional rape, can be more damaging than physical abuse. But the difficulty will be proving this type of abuse. With physical abuse you can often see the damage, not so with emotional abuse. Also, what about those men who are subjected to emotional abuse from their wives/partners. The introduction of this new law is great, but I feel proving it is another matter.

As tigger says, how on earth could this work in practise?

I'm not sure how this could be proven either. Emotional bullying must be very hard to live with and my sympathies are with you tigger. I wonder when you first realized that your partner (I assume?) had a controlling personality? Or in other words when this all started? Was it early on in the relationship of was it triggered by some particular event or other? I have often wondered whether controlling behavior early on in a relationship is cleverly disguised as concern and the need to protect?

I consider myself to be very lucky to have an extremely easy going DH. He genuinely just wants me and the family to be happy and although he often comes at the very bottom of my long list of responsibilities to others he never complains except for worrying about my welfare.

It was always controlling, just never realised until I started to fight back.

The only answer is to leave a relationship like this. The bullies are never going to change and it can lead on to physical abuse.

And even if it doesn't turn physical people are better out if it.

My ex was a control freak, I didn't realise how much he had undermined my confidence until I left.

Long story, perhaps for another time, or maybe not, bearing in mind recent experience here.

I agree with Anya completely. I had a friend who met one of these types on an internet dating website. I was aghast when after only seeing him for four months they ended up living together (she moved him in). They then got engaged, I and other friends tried to tell her to be wary, to no avail.
It was only after he moved in that the trouble started. My friend was a vivacious, funny and fun-loving lady. He completely killed her confidence, personality and her ability to judge situations for herself.
My friend had run businesses and had a damn good brain, she became a shadow of her former self.
He was a superb actor, my friend's family all thought he was wonderful. I tried to broach things with the family about my concerns, but was told where to go.
In the end he destroyed my friendship with her and others. One of her other friends went to visit her one time (in their new house, that he persuaded her to move to) and was shocked at how downhill she had gone. I will never forget my friend, it has left me very wary of internet dating sites to this day. My friend passed away a long time ago, we only kept in touch by Christmas Card and phone latterly, but I believe I was lucky to have that much contact. At her funeral he cried all his 'crocodile tears'. I left early with another friend as we were both so sickened by the whole thing.
The only thing I will say is this - my friend's family who were close to her did not see this man for what he was. He hid it extremely well, along with my friend. How on earth they will ever prove these cases in a court of law I do not know. I tried to help my friend and was practically called a liar. The other thing you have to remember is , the partner suffering the abuse will support/ cover up things at all costs. The other factor in my friend's case was, she was older and told me she did not want to be alone. So very sad. I feel he destroyed her.

It is highlighted on The Archers at the moment (if you listen) and you wonder what it will take for anyone, including the wife, to realise it.

I've been that wife and my DD married a clone of her father. It took me 25 years and dd about 20, to finally get away! These people are very clever and likeable too ( unless you live with them!)

My DD1 was in such a marriage for 18 years. She didn't realise at the time, but when he decided to leave to live with another woman, she had a lucky escape. Unfortunately he still tries to exert control in the only ways left to him - non-payment of child support, mind games with the children and deliberate obstruction of the divorce process. It has been 3 years now, and DD has regained some of her self esteem, but still suffers panic attacks. She is a lovey person, who would do anything for anybody, which of course he hated and tried to prevent!
Let's hope this new law will highlight to abused women that they should not put up with this treatment.

Dd3's ex was very emotionally controlling and abusive and we had emails to prove it. It's all very well to say someone should leave an abusive relationship but victims are generally so undermined that they cannot summon up the emotional wherewithal to do so. Dd3 got out but could not be persuaded to do anything about the idiot after as she was still in fear of his vitriol! She could have had him prosecuted for putting someone in fear of violence.

I am sorry for anyone else who has been subject to this would point out that bullying of any sort isn't just perpetrated by males on females.

I was that person, too. At the time I thought no-one would ever believe me, but after I got away (a friend saw him hit me over the head with a bottle so told me to move in with her) many friends came forward and said they didn't understand why I had put up with him. People don't like to interfere, and assume you know what you are doing, I think. Ex was ok at first, but more controlling as he aged so it sort of crept up on me, and when I stopped working felt very isolated.

I saw him last January, I had to talk to him for DD's sake, but looking at him I wondered why on earth I had been so scared of him. He was brilliant at twisting everything I said.

Exactly - DD1 sent a definition of narcissism to me and DD3's ex ticked every box!

Narcissistic Personality Disorder If you've lived with a Narcissist you'll eventually know about it but only on reflection (ironically). Charming chameleons...

As KittyLester wrote, it's not just men on women - men can also be the victims. 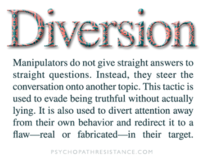 DD saw this yesterday, and instantly recognised it as one of her ex's tactics. He never gives a straight answer.

When I worked for the Witness Service, I supported quite a few men who were domestic violence victims one of whom was a fairly high ranking officer in the army and another who was a gp. I was always pleased to see that they were brave enough to come to court. That said , most of the victims were women.

Emotional bullying was basically the reason DD left SiL. It started with him sitting in his car outside the school on her prom night checking up on her. He's still doing it now, if she Skypes the DGC he has to be in the room so he can vet everything said. Her new partner is not allowed to be in the room with her during these conversations and more that I won't go into.

It took someone very close to me over 2 decades to finally break free of this type of bullying, now he no longer has power over her, she is a different person.

What happens if it isn't a partner but another member of the family?

The same rules would apply Ruby - domestic applies to any family member.

Do Airlines Cheat US?

Robot mowers. Does anyone have one?