WORDS FROM THE CROSS

Father forgive them for they know not what they do.

I am looking forward to attending all my Easter services on my live streaming from my Cathedral . It starts this evening
Maundy Thursday all the way through the Easter.

I love the Good Friday service and always cry at the suffering at the cross where He gave His life on the hill at Calvary for every one of us sinner or saint.
We can be uplifted as He rose again from the tomb once more restored.

Thank-you Annie for your post, may the peace of Christ be with you all and your families this Easter time and always.

I will be watching online services too. Thank you for your words annie

May the love of God and the fellowship of the Holy Spirit remain with us all, always. 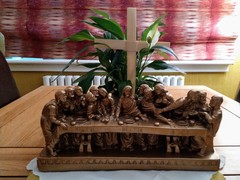 I thank God every day that we have the technology to keep in touch with our family friends and faith.

Our local parishes have been streaming daily Mass, Scripture Talks, Psalms, Rosary, Stations of the Cross and Benediction.

Here is my focus for Holy Week.

Thank you Annie for these posts.

The Queen has handed out Maundy Money by post for the first time in her reign.

The Queen wrote to recipients, including a 101 year old, about her 'Deep disappointment' she was unable to meet them in person.

Have just been watching Mass and 'Watching' at Shrewsbury Cathedral . Not the same as 'the real thing' but thank God for technology!
I wish you all God's help in these very trying times .

May God bless you all and keep you safe xx

Like all of us reading this throughout this week I want to thank Anniebach for leading us through this really strange time.
I too was due to be in the Church this evening - I was due to carry one of the oils at the beginning of the Mass and then later have my feet washed. Afterwards the period of watching for me always brought home the true meaning of Easter.
Instead, this year, we were outside clapping and cheering our NHS staff and all carers and keyworkers - God bless them all and keep them safe.
At 10.30pm I will watch the Choral Meditations and the Solemn Mass of the Lord's Supper on EWTN. As some have already said - we have amazing technology these days but I do feel for those without it.
May God bless us all and keep us and our loved ones safe and thanks again Anniebach

from the bottom of my heart.

‘Father into thy hands I commend my spirit’

He joins his Father in Heaven, he goes home, and - prepares
a place for us.

From our childhood Sunday School

There is a green hill far away,
Without a city wall,
Where the dear Lord was crucified,
Who died to save us all.

We may not know, we cannot tell,
What pains he had to bear,
But we believe it was for us
He hung and suffered there.

There was no other good enough
To pay the price of sin.
He only could unlock the gate
Of heav'n and let us in.

Oh, dearly, dearly has he loved!
And we must love him too,
And trust in his redeeming blood,
And try his works to do.

That brought tears to me eyes Annie

Easter is always such a moving time especially Good Friday, and even more so this year.

It's good to remember the meaning of Easter.

Such lovely comforting words from everyone. Peace and hope for the future to you all.

Thank you 3Nanny6
I cry also, but have not heard of anyone else crying. I feel as though I am wrong to cry. just listening to our church service for Good Friday, streamed from our church website.. CofE
www.youtube.com/watch?v=d0ybUpuLn8M

. I cried last night when we had our minister on FB providing us with a much needed time of prayer and reflection.

and if I may, our Vicar read this out.

Now Barabbas was a killer and they let Barabbas go.
But you are being crucified for nothing that I know
But your God is up in heaven and He doesn’t do a thing
With a million angels watching, and they never move a wing.

It’s God they ought to crucify instead of you and me
I said to the carpenter, a-hanging on the tree.

To hell with Jehovah, to the carpenter I said.
I wish that a carpenter had made the world instead.
Goodbye and good luck to you, our ways will soon divide,
Remember me in heaven, as the man you hung beside.

‘Today thou will be with me in Paradise’

Christ to the thief on the Cross.

Thanks Annie for the bible quotes through Holy Week.

Thank you so much Annie

Thank-you Polnan ; I have only seen one other lady cry in the church on Good Friday and I am glad to hear you also feel moved by it. I manage to hold things together it is the part where we all go forward to kiss the cross, every year there is a man that sings The Old Rugged Cross and his voice is beautiful on the walk back to my seat I am dabbing my eyes with my tissue and my tears are falling.

Smileless2012 ; Pleased to hear you were moved by the prayer and reflection time.

My church is Catholic however we are all one in His eyes I am sure.

In support of Gransnet