Have you ever been on a TV show?

Watching Escape to the Country today and wondering what makes people go on this type of show. I'm glad they do as I love watching but I wouldn't do it myself.

Have you ever been on a TV show? What made you go on it and what was the experience like?

Yes. Whimsically entered a magazine competition and this turned out to be the route to the prospective prizes. Sale of the century was the game. I was runner up and very happy with the result. What was particularly enjoyable was the first class rail travel and the up market hotel. We were on 16.67% mortgage at the time and really feeling the pinch. Great memory.

Yes, University Challenge and DD and I were on the Great Antiques Hunt.

Kim19, yes, the hotel and meals were great, but I didn't much enjoy be treated as just like another prop, stuck in corners and ignored until needed.

Yes, University Challenge and DD and I were on the Great Antiques Hunt.

Kim19, yes, the hotel and meals were great, but I didn't much enjoy be treated as just like another prop, stuck in corners and ignored until needed.

Myself and my daughters were in a featured choir for Songs of praise years ago . The camera settled on me for a while which made me cringe when watching it.

A bit like ginny. I was part of a choir, several times. I learnt that I looked at the music far too often! They like you to look up,

Location x 3 is one of my favourite programmes, as it is so real reality based, not fake Reality.

Ive been in the audience of Under Offer with Fred Dineage, does that count 😊

Friends were on Kirsty and Phil's love it or list it. The presenters etc were nice apparently, but the builders who did the work on their house were a nightmare and it ended up in court. They stayed there for a while but have since moved.

Mr R and I went to "Antiques Roadshow" many years ago with an item I wanted valued. We were queuing up to be seen by the expert and Mr R said something to me to make me laugh and they got it on camera and it was featured in the show. And the show was on 2 weeks running and so were we!
Amazingly, for once, I didn't look too awful either

You are right Monica nothing fake about Location. My DS really liked Phil and Kirsty who gave them lots of good advice.

Yes, in 1980 I was on Nationwide which was a BBC current affairs programme on in the early evenings . I enjoyed filming it but when it was shown about a week later I hated the sight of myself and ran screaming from the room.

I was in the Question Time audience just before the first lockdown. My question about the WASPI cause wasn’t chosen, but the woman next to me was picked to speak so the camera settled on me for quite some time. I was nodding thoughtfully….

Donkeys years ago I was in Honfleur in a café and a man came and asked us if we would mind being in the shots for a tv programme and have a free coffee. It was Hollyoaks . When my sons saw it they accused me of overacting as I pointed to the sun coming out……..

Were you up for a BAFTA that year Lucca? 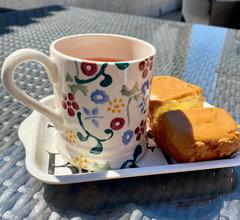 I was filmed with an item by Antiques Roadshow this summer. My item wasn't shown in the final edit and we were surprised at the ones that were shown as we hadn't seen any of them or the experts featured on the day we were there! It was a Covid friendly show so it was invitation only and we were all seated at separate tables for the experts to visit. Long waits but it was very interesting. We visited the other tables to look at their items and vice versa. However, none of us appeared on the show. They were filming the next day though so must have found more interesting things then. Maybe I'll be on one of the composite shows.
BTW easily the nicest person we met was Geoffrey Munn the antique jewelry man. Very nice man indeed. This photo is one DH took during a long wait for some technical reason.

Can't get rid of pic of DD's breakfast. Sorry.

I used to get free tickets to go and watch programmes being recorded at Granada Studios, loved watching Stars in their Eyes, when Matthew Kelly did it he used to run round the audience with a big bucket of sweets. We watched You've been Framed being filmed with Lisa Riley and she was so rude to the audience, never liked her since.

I sang with a choir on Stars On Sunday. Not sure if that's a boast or a confession!!

in 2004 our blocked drains were featured on a BBC1 programme. We live at the bottom of a hill and the sewer drains run from the top. Somewhere in the street was a blockage and gravity had pulled it down the pipe and settled in a drain, under a manhole cover in our garden. We called the drain clearers and instead of them calling to make an appt the producer did, and asked if they could film it. Absolutely no notice, they arrived the same day so I had no chance to do my roots (which were white and I was dyed brunette in those days - and yes, they filmed outside and it was windy). When the drain clearers were ready to clear the blockage we were invited to go outside to see the ensuing eruption of raw sewage which gushed up 5 feet into the air (I kid you not)

It was dark by then, they had been here most of the day, so our garden had floodlights in and the sewage looked like chicken korma!

Of course the cameraman did a close up of my face which was suitably horrified and in my best Queen's Yorkshire voice I said 'that's not all ours you know!!'

I was mortified when I saw myself. Barbara Windsor RIP narated and got my name wrong. She referred to me as Anne.

I appeared on our local BBC news programme Look North. I was filmed demonstrating an electronic voting system (instead of putting a cross on the ballot paper, you would simply press a button on a screen). Dave Guest, the presenter was lovely; however, when I watched the clip later on TV, and Dave was speaking to camera, you could clearly still hear me in the background explaining the process to a voter - honestly, I could whisper over 3 fields! Sadly, electronic voting never caught on, no idea why.
I have also appeared on screen when I was a spectator at an England -v-Italy 6 Nations Rugby match. It was held in Rome, and I was sat next to some famous Italian rugby player (I had no idea) and the cameraman focused on him and his family for ages! I saw myself on the stadium screen and tried to look very interested in the game (which I wasn't 🙄).

I was a dancer on the Hitman and Her! Happy days

or nights I should say

My husband was filmed for a programme called Build my Workshop (or something similar). Whole day shooting, endless cups of tea. He was on for 7 mins. However, when we moved here someone came over and said they recognised him.

Anyone near the Hampshire/Berkshire/Surrey borders?

Cocaine use in House of Commons

Please GNHQ ... would you consider letting *EllanVannin* come back to this site?