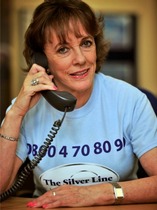 We're delighted to be welcoming Esther Rantzen to GNHQ on 17 December at 12pm to answer your questions on her career, The Silver Line, ChildLine...or anything else you want to know!

A graduate from Oxford, Esther's career in broadcasting began with BBC Radio as a sound effects assistant. From there she moved into television as a researcher/reporter for Braden's Week and then in 1973 as producer/presenter of That's Life, which ran for 21 years on BBC Television.

Esther has made a number of pioneering programmes on subjects such as British women's experience of childbirth, stillbirth, mental health and child abuse. In 1986 she invented the concept of ChildLine and chaired the charity for 20 years.

After the merger of ChildLine with the NSPCC in February 2006, Esther became president of ChildLine and a trustee of the NSPCC. She contributes regularly to the Daily Mail and other publications, and lectures on children's issues, broadcasting and is the only trustee so far to have appeared on Strictly Come Dancing, been in ITV's Australian jungle and appeared on Question Time while standing as an independent candidate for Luton South. She received an OBE for services to broadcasting, and a CBE for services to children. For her work in broadcasting and for children she has been awarded 5 honorary doctorates, and is a patron of 19 charities. She has also created a new helpline for older people, The Silver Line Helpline.

In 2011 she published Running Out of Tears to celebrate ChildLine's 25th Anniversary.

Post your questions for Esther on the thread below, and join Esther on 17 December at midday.

Hi Esther, I understand that you have taken an interest in grandparents who are denied contact with their grandchildren and the rights of grandchildren. Is there going to be another "line", something like "granline"?

Hello Esther, you have talked at length about loneliness that our older population experience. Christmas time is a particularly difficult time for people who find themselves alone,do you have any ideas on how to combat feeling so lonely.

I nursed my husband through cancer from which he passed away. I worry about being ill and alone without that one special person to care for me.

From what I have read the need for the "Silver Line" surprised many people. How are things going with it now?

I don't have a question but would like to congratulate you on your achievements. You have shown great courage in starting your projects and I am sure you have done more good work than any politician.

The question I would like to ask Esther is when are the goverment going to keep its promise to give grandparents the legal right to see their own grandchildren?

As alienated grandparents who went down the legal route, we found after 18 months which is the time it took for our case to conclude that we were denigrated in the eyes of our grandchild - no longer Nanny and Grandad - but simply Mr and Mrs... enough time for the disgruntled parent who stopped contact for no reason to brainwash and alienate our grandchild, with whom we'd had a beautiful loving 11 year relationship.

Why? The unending question.... we do not have a criminal record, do not drink, smoke, never done drugs... Yet the parent has an alcohol and drug addiction!

One phone call 'You're never seeing your grandchild again...' life is now full of grief, our grandchild brought us so much happiness... destroyed by a disgruntled parent in 6 words.

Children should never be enmeshed into adult arguments.... it's abuse not only of the elderly but also of the child.

I work for silverline and can see the benefits that the telephone befriending service does. it works both ways, for the person who phones and the person who answers the phone. long may it continue

Esther. You downsized fairly recently, a huge decision to make. Are there benefits? I am in a quandary; whether to sell up the family home of 34 years which can accommodate all my far flung family when required, but which I rattle around in most of the time but which holds so many memories, or to buy something smaller and if so - here where I have friends or nearer (500 miles,12,000 miles!) my daughters where I would have to make a new life. Did you and your husband discuss this before he died. I so wish we had, but it's something you don't do, thinking you have years of life together ahead of you.......
Congratulations on all your good work - you are amazing

My question is...how do you do it! You have had such a varied and busy professional life and great successes, how have you fit it all in and have you had to make sacrifices along the way?

Hi Esther.
I dont know if it is just me, but I had never heard of Silverline until I came onto this forum.
Do you have plans, or do you think you need plans, to make it more widely heard about?

Hi Esther, I went through the courts for almost 2 years, actually won a contact order for myself and my 86 year old Mother. In the end it fell apart because the Mother got the children to say 'we hate you'. Absolute nonsense of course. Things need to change, we need to protect these children from this kind of behaviour, how do you propose we can do this ? I see all these laws coming in re emotional abuse, but this area of family needs urgent attention. So many children missing out on the love of a parent, grandparents and extended family. This is abuse, clear and simple. Any kind of action you can suggest in moving this into becoming an issue a politician or court might actually be interested in ? My grandchildren are not in a good situation at all so we cannot leave it alone. We are tied by the regulations of the family court about speaking about it. There is not much I would not do however to bring about the needed change. In the meantime all these children are suffering and will suffer in years to come. Help !! Thank you for coming on board with this xxx

Now in my 80s I live alone - am denied contact with my only grandson.
Tea parties for pensioners don't appeal to me .I would like to talk to teenagers. Are there ways that I/we can make links with youngsters .Maybe some of them do not have grandparents nearby.

I heard of a senior school where computer classes for older people are mentored by older pupils.
When my daughter was a Girl Guide one of her badges involved visiting an elderly lady for several months.
Do you have any thoughts on fostering the links between the generations?

Esther. Happy Christmas! Here's my question - from your extensive experience, what are the principal reasons why adults abuse children. It seems such a dreadful thing to do, even for somebody who may have been abused themself.

Hello Esther, apart from Childline and the silver line, which I assume rank very highly - what has been the most fulfilling part of your career. we used to love 'heap of the week' when you did that's life

You spoke a few years ago about how sad it was to become a single grandparent. I am about to become one too, so any advice you have on how to cope with it would be much appreciated. THank you.

Hello Esther,
Many congratulations on the sterling work done by Childline.
On a personal note, I believe one of your daughters was very poorly during her teenage years, and I wondered how she was doing now?

Just wanted to add that I too feel that Childline is doing some wonderful work with children, and I wonder if you talk more about what your goals are with Silverline? Both groups can be very vulnerable, and I have been quite excited about Silverline as it introduced what I feel is a necessary service.

I would like to ask what specifically prompted you to set up childline and whether you are still involved?

And also what gave you the idea for the silverline?

I used to love That's Life and think it's a great shame there is nothing like it on television any more. Do you think it could ever make a comeback?

Hi Esther I have nipped over from Mumsnet to ask a question. My mum was widowed ten years ago and struggled a lot with being on her own. She threw herself into caring for her mother and that helped her feelings of loneliness but a month ago nana died aged 90 and now I am so worried about mum (who is 72) Any ideas of how I can help?

We're very pleased to have Esther at GNHQ, ready and waiting to answer your questions from 12pm. Welcome, Esther!

I hope its ok for me to ask another question?
As has been mentioned you have talked about the rights of grandparents, or as I see it the rights of grandchildren to be able to have a caring and loving relationship with their grandparents.
Do you think that he way forward is something on the lines of what happens in France, where, it is enshrined in law that if a child wishes they can continue to have that relationship?

Hi Esther, I understand that you have taken an interest in grandparents who are denied contact with their grandchildren and the rights of grandchildren. Is there going to be another "line", something like "granline"?

It's tragic, really heart-breaking when contact is denied, and some of the grandparents have told me they just don't know why, so there is nothing they can do to put it right. The French have a law which says that children have the right to access to their extended family, especially grandparents. I think we need a similar statement in our law. Because of course it is about children's rights, rather than the adults.

Hello Esther, you have talked at length about loneliness that our older population experience. Christmas time is a particularly difficult time for people who find themselves alone,do you have any ideas on how to combat feeling so lonely.

Absolutely. Ring 0800 4 70 80 90. The Silver Line is there 24/7, as someone wrote to me "where did you get such lovely people?", and they are indeed lovely, and they love talking to older people, sharing views and memories, and jokes. So do please try it. Any complaints, let me know. If you enjoy it, also let me know!

Can you think of a time you may have made a mistake with your children?

I am angry with God

Breast screening. Shall I go or not?