I desperately need your help

In April I decided to get a small dog to keep me company. In fact an 8 week old Shih tzu.

In June I found a lump in my breast, which turned out to be grade 3 aggressive breast cancer. I had 2 surgeries in 5 weeks, as they didn't get it all the first time.
I had my first chemotherapy 2 weeks ago, but there have been some complications as its made my stomach problems flare up. I have a long history of acid reflux and ulcer...a burst stomach ulcer killed my mum, and I found her dead in her chair.

The oncologist recommended I double the Omeprozole I've been taking for years although I was already on the maximum dose,as any ulcers, wounds and sores are extremely dangerous while immunity is compromised.

These tablets have already destroyed my bones, but I need the to stay alive. Since upping the dose to double the maximum I'm in dreadful pain deep in my bones. Also I have fibromyalgia and M.E, which could be contributing to the pain and fatigue. I dont seem to have recovered from the chemo due to all this, and I am totally and utterly exhausted as I can't seem to sleep.

However the above is not what I need help with. I live on a small over 55s complex, and my neighbours offered to have my now 8 month old puppy when I go for chemo etc. She is 66 and he 77 years old. They have a 38 year old son who has never left home. I thought they were very kind, and accepted their offer, but now wishing I hadn't.

They have no friends, and the neighbours avoid them, because they just tal and talk and talk. The othe day I let my dog out and the man copped me, although I kept saying I was freezing and was going in he totally ignored me, anf it was half an hour before I could get away and then I had to be firm and just walk in my door. Then she comes over and stays 1 1/2 hours. She just moaned and moaned wanting me to solve her problems. I told her I had no sleep and been up all night. At one point I was slumped sideways in the chair totally exhausted.
To be blunt they are ignorant in every way. Neither the wife or son knows how to pay a bill, and they are rather strange.

The son told me that they don't look after my dog just as an act of kindness, but because they have become quite besotted with my dog. Theyve always had dogs, but cant have one as they're property is an apartment.

I dont know what to do as every time I go out to let the dog have a wee they come and talk to her, and then the dog doesn't go. They even wave to the dog.

Im on the verge of losing my temper as I feel so dreadfully ill, exhausted, and dont have the patience for this. How do you make people like this listen ?

First of all investigate alternative doggy day care. There is usually the option of daycare at Kennels who will collect or ask at your vets for a list of approved sitters. Just inform them that you have had to make an alternative arrangement, perhaps your family could help with this.
While I am sorry for your neighbours who are clearly needy, you have a responsibility to your family and yourself first. If that includes not answering the door or being forceful when outside so be it.
You have to learn to say No and if you are no longer dependent on their help with dog sitting this should be easier.
Good luck with all your medical issues, I hope you have friends and family who can make your life a bit easier.

I'm sorry to hear how poorly you have been and how miserable this all is for you. I'm afraid you are going to have to be Jack Blunt. I think people like this don't take hints or gentle persuasion. Just tell them you are too ill to cope with socialising at the moment and have been ordered to rest. I think you may find some help with the dog for your hospital visits from several of the animal charities. You could start with the Dogs Trust. I do hope you are feeling a little better soon

I am sorry, I have no advise for you other than what has been said. There is the Cinamon Trust who are also worth contacting as regards help with your dog. I do hope you are feeling better soon.

I am so so sorry you are having these problems and feeling so poorly,you must tell your neighbours that you have found alternative care for your little dog,(if you lived near me I would do respite care for you in a shot)
Teetime is not wrong in getting in touch with one of the Dogs Trusts they have lists of people who will care for dogs who have poorly owners having treatment.
With you living in a over 55 community can you not get your support worker to have a word with these people and insist that they back off and leave you alone whilst you recover,you must learn to say no when they come visiting and close the door on them asap.Keep well.x

All good advice from the other posters. You do need to see your GP about the effect you feel you are having from increasing your omeprozole on the advice of the oncologist. Let them investigate and offer you further advice. Have you any nearby family to support you with the problems surrounding your dog and your neighbours? It's hard to be blunt with people when it's not your nature to be so, but as Teetime says, I think you must try to be, if you can. Your well being is more important.

My D has a puppy about 10 months old
and she has taken him to doggy day care which are attached to kennels, so that might be somewhere to try.
He absolutely loves it having lots of dogs to play with but it does cost £21 A day if cost is important.
I wish you all the best in your treatment and recovery.
I hope you get the dog sorted so you can decline your neighbours " kind offer".

Yorkshiregirl, I am so very sorry to hear about all your health problems. Doggy daycare is a wonderful thing IMO but expensive - as Alima mentioned earlier, do look into the Cinnamon Trust, who I believe do not charge as they organise voluntary dog walkers/fosterers.

I wish I was in your area, as I would be more than happy to help out, but I'm guessing you're not in the South of England? 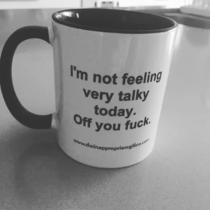 Sorry you're having a hard time, Yorkshiregirl and your neighbour must be driving you up the wall.

I hope this gives you a smile....Instead of losing your temper, why not make him a cuppa in this?

Yes! Good advice above, you need to get someone else for the dog sitting, then you're going to have to fall out with these people who are a nuisance, tell them to leave your dog alone when you are out with it for a wee. Be firm! The stress of them will not help your recovery. I'm sorry that you are so ill and in pain.

It sounds as though you made what you thought was a reasonable solution for you and your little dog, I;m so sorry it worked out like this.
The last thing you need, especially now, is involvement with "rather strange" neighbours. It's worth finding your local Cinnamon Trust, one of my friends is a dog walker locally via the Cinnamon Trust. I hope there is someone near to you linked too that organisation because you can feel more confident you aren't getting drawn into the lives of people you would rather avoid.

Thanks everyone. I do have children who are very supportive, but these neighbours have become extremely annoying. Just this morning I took my little dog into the garden for what should have been a quick wee, and the women immediately came over to say hello to my dog ! Are these people mad how do they expect me to get my dog to do anything when she's fussing ?
She said to me " oh you dont look well this morning do you want me to take Betty"(My dog), and I said no. I felt like saying just bugger off, but I really don't want any hard feeling between myself and my neighbours. Its a total nightmare when I'm feeling so ill.

I cannot believe it!!

Flying monkey - anyone aware of the term?