how are you coping without visits to hairdresser

I ended up taking the scissors to my fringe and also cutting off about an inch from the length. Neither was very successful. But as not going out i am not too bothered. I thought it more important to keep fringe under control than risk keep touching my face moving it out of my eyes and also risking a fall 'cos i couldn't see where i was going!!

Coping so far with my own hair - less so with that spaniels long show coat. I took the scissors to her hairy mammoth feet, not very successfully. I trimmed around the big labradoodle's eyes so she can now see and trimmed her beard so her twice a week treat of sardines doesn't end up sticking to it and ensuring she gets a face wash and shower.
Sorry travels - off piste x

I am partially visually impaired- I have not tried yet but the end result will be interesting! I did think about lopping off an inch at the weekend but chickened out. I live on my own so no help around.

A new young hairdresser did mine last time a couple of weeks before lockdown.
I think she must have cut it with a knife and fork wearing a blindfold, so it's going to take a few more weeks to recover.

I never go so it doesn't bother me. Brush it and wear it clipped up.

I hate going to the hairdressers and staring at my ugly mug in the massive mirrors . I have always hacked my own fringe and coloured my own roots anyway.

My hair is very curly so its Ok if it grows a bit- sort of looks deliberate ageing hippy BUT the grey/white roots. I look at it every day and wonder if today is the day I use one of the two boxes of colour I managed to get before lockdown. If I go purple I will let you know.

I’ve cut it myself! Brushed hair forward over the face and snipped half an inch off. Also cut a little off fringe very carefully. Doesn’t look too bad.

I would not attempt to cut or colour my hair myself (normally have highlights). My hair is wavy/curly so decided to let it dry naturally then I ran a hot brush through it and it looks passable.

I'll have to cut my fringe soon and I am desperate for highlights but as I'm not seeing anyone I'm not too worried.

Roots being covered up with Josh Wood Blending Brush then use of hairbands and, for first time ever, a scrunchie to have a ponytail. Would not attempt to cut fringe so am parting it - discovering then best side on awful video calls! My DH was much easier - clippers No 4 all over, then a trim on parts with No 2 and finally tidy up shaving. He is delighted although embarrassed as met his barber the next day when essential shopping ...

I always cut my own fringe (top tip, never cut it when it's wet) and was told how to do it properly by my lovely hairdresser. The rest of it'll just have to get as long as it gets. I guess we'll all be in the same boat so I'm not going to worry about it. Cut my husband's hair yesterday - just trimmed the fluffier ends. We're still on speaking terms so I can't have done too badly.

I normally have a 'pixie cut' so all is not well at the moment! I think I will crochet a head band and wear that.

I have a medium length bob. I have cut my own fringe - I usually do it myself between my five-weekly cuts. Looks fine. I intend to let the rest grow. I will use slides to hold it back if it gets awful or gets on my nerves! I am thinking I might use this time to change the style a bit. If it grows enough, I will lose the layers at the end of lockdown, and have the hairdresser cut it to more one length. A chance to have a bit of a change, perhaps! Colour is not an issue for me as I am grey, and very happy with it!

I hate hairdressers too, gillybob, sitting looking at my big ugly mug is absolute torture, I avoid mirrors normally day-to-day at all costs! Can’t stand the chit chat either, to be honest. I never seem to get what I ask for, but that’s probably my fault as I can’t bear looking at what they’re doing and just want to get out as quick as possible.

I’ve had a go at trimming my hair as the ends at the back have been sticking out all over the place. I have managed to get it reasonably straight - it is difficult as mine is short and has layers. Did an ok job on my fringe, just took the ends off. It says on you tube to chop the ends with the scissors vertical so it doesn’t get that dead straight edge, so I tried that but managed to chop a finger as well 😆 oops. I think it’s the mirror thing, I move the scissors the wrong way.

A friend said the way to cut a fringe is to lean forward so that it falls away from your face.

I’ve no idea if it works, The advice came too late for me😱

Tips for cutting fringe can be found on u-tube -
DON'T raise eyebrows as you cut -it will be too short,
Hold scissors pointing at face and snip tiny sections next to each other,

Fortunately I dont have to dye my hair and I trim my own fringe so I only go to the hairdressers about 4 times per year. Try tying your hair back. X

My hair was cut prior to lockdown when we came back from the post Christmas holiday so it has slowed down growing again now. I coloured it a couple of weeks ago but other than that it can last until this is all over, will just have it tied back if it grows too much there is always a solution to each challenge. 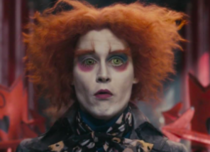 I had to online meet with my school tutor group this morning. My hair is currently pale orange. This is a result of the extreme fading of my previously bright red (defiant gesture in Feb. when I needed a cheer-up) hair. It looks a bit like the hair of the Mad Hatter in Alice in Wonderland. The style is also similar, given that my cut is growing out.

None of them looked shocked. I supposed compared to previously, it's fairly minor in comparison.

Lots of 'how to' videos on YouTube
I do the easy pony tail one, gives layers.. I stopped colouring a few years ago, so rarely visit a hairdresser.

Mine was all shoulder length so I could tie it up out of my eyes in windy weather, now I'm catching any flyaway bits and hacking them off with kitchen scissors, developing a bit of a mullet but only at the front. DH and son much easier, have clippers for the cockapoo and just use those. All three get lined up for buzz cuts now.

was due at the hairdressers when the lockdown happened. always have short hair and when my fringe starts to need being pushed away i know i am ready for a haircut. i coloured my hair a few weeks ago but am now desperate for a cut but am hopeless at trimming so maybe will have to wait

My stylist is fantastic and as she has her own business I have paid upfront for 2 visits , this helps to keep her business viable even at this moment. She cuts my hair so beautifully and because of this the style grows out really well. I am luckily going white naturally so the colour edging out will hopefully look natural enough.

estrangement from only son and his three children