My son sent me a birthday card🙄

Inside he's written "Sorry about the card. The local shop didn't have much choice.

Well a Happy Birthday from me too,and i know exactly how your son must have felt.
The card shops are still closed in my area.

Son's are great aren't they.

DS lives in Aus. and mother's day there is in May so I don't get a mother's day card in March, or May for that matter

. My birthday is in May and about a week after my birthday I received a beautiful bouquet of flowers with a card 'For a wonderful mum from a forgetful son'.

We spoke to him on face time a couple of days later and he said his choice of card was 'playing safe'. He knew he'd missed mother's day, thought he'd forgotten my birthday so was hedging his bets

Your son has a gsh as does his mum. We made our own cards during lockdown with a programme dh has on his computer - called them lockdown specials.
A very happy birthday to you.

I love my son's sense of humour - a few years ago he sent me a Mother's Day card saying "You've been like a Mother to me!"
Luckily I thought it was hilarious!!

Makes a change from "It must have got lost in the post" Smileless. 😬

Illte, I think you and he share a sense of humour! Great

Happy Birthday 🥳 . What a lovely sense of humour your son has 😀.

Happy Birthday Illte! My son must be your son's twin!

A friend bought an anniversary card for her uncle and his wife. She was so focused on finding a nice sentiment inside that she didn’t notice until she got home that on the front it said To My Son & Daughter-in-Law.

Happy Birthday Illte that made me chuckle

"You've been like a mother to me" Absolutely Glorious!

One of my sons sent me a personalised Moonpig card for my birthday last year.......he had forgotten to change the name on the front to his apparently I have a daughter called Debbie his siblings will not let him forget this anytime soon.

It did make us laugh thou 😂😂 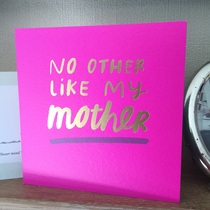 Still not quite sure how I was meant to take this....

Have I done something wrong Maw? I was just sharing something I thought was funny.
😁

Oh sorry I didn't get the card picture the first time. I thought you meant me. Oh I think I'd better go back to bed.

I may have been touched to the point of becoming dewy eyed when my then teenage DS handed over a Super Mum mug one Mother’s Day (still in a Hallmark paper bag, but what the hey). He panicked a bit and said he’d just bought it because it had a bashed box and was in the half price bin. He has improved since then.

Still my go-to mug though.

My daughter had a habit of saying 'this is all I could get', when giving me something. Rather spoiled the pleasure of receiving a gift.

Apparently it was all they had in the local shop!

😂 DanniRae. I like your son’s sense of humour too.

What new emojis would you like to see on GN?

Fashions when you were at school

A new and humorous story - add a couple of sentences