In mind of that, I thought that perhaps we could describe ourselves a little, so that we can have a mental image?

So, to get the ball rolling, MrC thinks that I look like Boy George in his younger days (I know, aren't I the lucky one,

I would love to look like Helena Bonham Carter, but I'd settle for Kirstie Alsop (they are sort of idealised versions of me).

I hope that we have some fun with this thread.
Do with it what you want!
Like I said, it's just a bit daft

One day I hope to start a thread without an error in the title...

But who did / does your mother look like?
My mom looked like Penelope Keith, only with red hair.
Whenever I see PK I think, oh that's what she'd look like now...

An avatar? A little cartoon character of yourself or an animal or something of your choice to represent you.
(That's what I believe, I'm not great at that sort of thing)

An avatar can be a cartoon figure,animal or symbol that you choose. It means that for example when you see the husky dog symbol you recognise that person as someone you have interacted with before. If we had a 'who's on line' feature you could then chat with that person instead of posting into the ether where your post may never be seen by Husky. 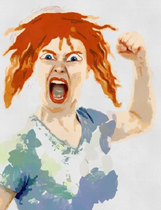 I looked very similar to Anne Robinson, when I was younger and had hair eactly like hers!
My pupils thought it was funny to use her catchphrases.
I now look like the picture.

These days, one of the Teletubbies - not sure which colour. The one with the handbag, probably.

When teaching French, I had an avatar who looked like me and spoke with a Scottish accent, I could then change it to speak French when using the interactive white board.
The children loved it and I encouraged them to create their own in ICT lessons.

I can't for the life of me remember what the computer program was called. 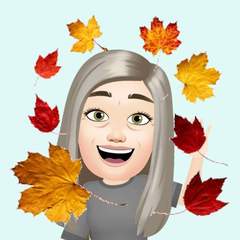 Mary that picture is fab! I look very much like that too!
Kircubbin - was it you who suggested avatars? That thread has now gone.
On the thread-that- has-now-gone, I suggested that we really need to focus on starting entertaining / interesting / diverting / whatever threads.
The forum is very much in our hands after all.

I look like Dennis Healey - well my eyebrows do anyway. DH says I look like a grumpier version of the Queen when she’s looking really grumpy!

That's my task for this week, make a more gentle avatar!

I need to find a program which doesn't involve lots of different dodgy downloads.

Is there one that looks like the lovechild of Benny Hill and Norah Batty?

Asking for a friend. 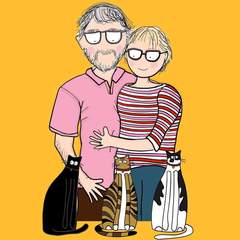 Me, him and the cats!

Ah kitty that is so sweet!

It is a picture that a friend of DD2 did from a photo taken on my 70th. Shes very talented.

Yes Fanny, I sometimes reply to a poster, then when I come back the thread is gone and I dont remember who it was or which forum it was on so I've wasted my time.

I have been told I look like Judi Dench which is fine except she is about 15 years older than me! My son looks like Ross Kemp and has had many people insist he is him!

I don't look like her but my friend, who was blinded in a jealous acid attack, who always said mum 'looked' like the Queen. Looking at photos of her when younger I can see the likeness. She would have been the same age as the Queen now.

I think that as the years have passed I have turned into a cross between a horse and a dinosaur. My dh tells me not to be ridiculous and that I haven’t changed a bit. I don’t know whether to be pleased or burst into tears!

I look rather like my dad did, (with a large and slightly crooked nose) but in a more feminine way (I hope!) I'm tallish and skinny except I do have rather a fat belly and look like I've swallowed a football. People often say I look young for my age, which always makes my day.

What new emojis would you like to see on GN?

Fashions when you were at school

A new and humorous story - add a couple of sentences