Sorry, I must be a terrible person but this news started my day with a smile. 😆😆😆

I wonder what all of the Qanon Covid denier types will make of it.

When he gets over it he will be even more smug.

I wonder what all of the Qanon Covid denier types will make of it.

You may not agree with his politics but to smile about a man, in his 70s, getting this awful virus says a lot about you.

Apparently, not just him, Melania too.

You may not agree with his politics but to smile about a man, in his 70s, getting this awful virus says a lot about you.

I know terrible isn’t it? Especially as Trump had declared covid a democratic hoax, and laughed at Biden for wearing a mask.

I do feel sorry that his wife has also contracted it and that by refusing to wear a mask he may have spread the virus to his employees and sycophants.

As long as it’s not a ploy for more vote catching.
I’m not alone in having that reaction by the way before I get told off,

Oh dear, right in the middle of election campaign.. And what a shame he’ll have to miss any further face to faces with Joe Biden.

Perhaps the next thing we’ll hear is that there will have to be a delay.

When he gets better wait for “the doctors said I was the best they’d ever seen at beating the virus, nobody knows more about the virus than me, they said I was a tremendous patient”.

Lucca so, so true!

And he'll be an absolute nightmare of a patient! 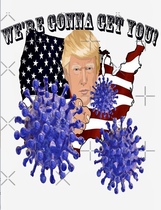 This graphic has been used on merchandise sold to raise funds for the trump campaign.
Could be read differently now. 😀

Is it to get him out of the next debate? That was my first thought. My second thought was that he’ s responsible for the deaths of thousands and thousands, he’s lied and mocked others - Biden, Democrat Governors and Representatives. My third thought was s**t , he’ll recover quickly and that will tip the election in his direction. Do you remember his first test and that it was the best negative ever, doctors had never seen such a big negative test? Whatever happens he’ll spin it to prove how wonderful he is.

When he has made an amazing recovery, everyone will see just what a tough guy he is, someone they can rely on to make the US great again.

I expect the bleach injections will give him a speedy recovery.

Very convenient for him.

Has our country ever been in such a state?

Would you consider that large and medium-sized dogs should be phased out?