For once it was nice to be invisible.

As I mentioned on another thread, I've just done a speed awareness course. Everyone assured me it would be fine, interesting and informative etc., and they were right.

But.....I was the oldest one there by quite a long chalk. We sat at round tables and there were six men and one very glamorous young women on mine. We introduced ourselves but nobody actually spoke to me. When we took part in group discussions, the men barged in first with their opinions then turned to Miss Fancy Pants and asked, 'What do you think?'

I just left them to it. It wasn't a competition or a test so there was nothing for me to gain by joining in. I'd had an early start, they didn't even give you a complimentary coffee so I couldn't be bothered to comment apart from the moment when one of the men demonstrated the hand clap he likes to do when annoyed by another driver. I pointed out he would have to take both hands off the wheel to do that!

His withering glance confirmed he thought I was just some old duck who shouldn't even be on the road.

He was happy to boast it was his third course though. He looked about thirty!!

I’ve quite got used to being invisible to the younger generation and now enjoy the benefits such as eavesdropping.

(My speed awareness course was full of older people like myself and was more like a social tea party - except we only got one small cup of tea and one biscuit half way through.)

Once you've accepted that nobody's interested in you anymore, it's quite liberating. 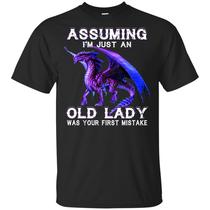 My friend has this Tshirt and I am really considering buying myself seven and wear one every day. If you found the course informative I would just take that away with you as the benefit of the course and take no heed of immature individuals who displayed their lack of commuication skills and ignorance. You really would not want these people as your friends so do not use another second of your life dwelling on them

When people have hand clapped to my son he usually replies "You want me to throw you a fish??"

. My other son bows in appreciation when it is done to him. I wouldn't recommend either response as it can escalate the road rage .

Oooh I love that T shirt.

Yes, Lona. It's very liberating to just let them get on with it. I'm too long in the tooth to let them think I care.

Ooh. Didn't know it was you on that thread merlot. (Didn't get round to reading that one)

DH did one of those. It was Christmas Day it happened. We'd been for a little walk after lunch and he was taken short for the loo! Only time in his life did he ever go over the speed limit.

I agree that getting older and becoming invisible can be liberating and less is expected of us. I play to that quite often when handsome young men here in Spain offer me a seat in bars because I remind them of their grandmothers!

The other side of that of course was when I worked and attended meetings etc some younger people switched off when I contributed my tuppence worth and be ignored. Then I would smile sweetly when things ended up the way I’d suggested the would!

Ditto from me MOnica.
I recently attended an art course, was the eldest there. The younger people treated me no differently to anyone else. Neither have I felt excluded anywhere else.

I quite like not being the focus of any attention now I’m older. It’s akin to being like the wallpaper.

I sit now with my back to any wall and people watching.

I had my turn in the sunshine. It’s for other, younger ones now! I enjoy watching and listening.

He was happy to boast it was his third course though. He looked about thirty!!
The speed awareness courses are not very effective then.
Perhaps after two courses, a very hefty fine should be in order for a third offence - hurt his pocket and he may think twice about speeding again!

That was bad luck Merlotgran. They aren't all like that.
Love the T shirt Brandybutter. Where can I get one?

When my OH is annoyed at another driver, particularly those aggressive ones who toot and roar past with a glare, he blows them a kiss. It worries them no end!

I've done 2 speed courses & really enjoyed both. I really think they should be mandatory for everyone.
Both had mixed age groups & it was not only interesting but fun too. Lots of laughter & 2 cups of coffee & biscuits

Maybe you didn’t really want to be there

I can think of much nicer things to spend £94 on

I wonder if it were true that it was his third course? You can only do one every three years but I wonder if that’s too generous anyway?

Same as Monica, I don't feel invisible with younger people and they certainly wouldn't have ignored me at a meeting. In fact I enjoy the company of younger people .

I also enjoy the company of younger people but when faced with a room full of male egos I prefer to hold back and let them get on with it.

Doesn't mean I don't have a voice or an opinion, I'm just reluctant to waste either of them.

I share your annoyance. I went on a cookery course and was completely ignored by the other participants. I knew I’d lost a bit of weight, but invisible! When we broke for lunch we were seated at a long table, I sat down first and the other 5 folk seated themselves at the far end. When the tutor arrived, she sat next to me and we chatted throughout, I wish I could have photographed their faces!

Merlotgran. Yes me too.
We can all learn but there are always those I would prefer to let have their' moments'

So sit back as at some stage you may be sure one of them will surely on opening their mouth not only look a fool as well as proving it.

Oh, I am liking the t shirt!

I was invisible two days ago, not with younger people but my DH and his friend and friends wife, talking about something terribly important obviously, buying and selling property! I was discovered later thankfully.

Pet hates but keep it ‘nice’

Lockdown is hard for us all, but on a positive note......