Are you a subversive grandma?

After 11 years of following the 'rules' as laid down by DS and DiL I have started to rebel and break the rules. For example, I allow my 11 year old GD to watch Strictly when she is here for tea on Tuesdays (tv and tablets banned during the week). On Thursdays I take the 5 year old out for tea and give her a glass of squash and a chocolate muffin. I wouldn't dream of ever saying 'don't tell mummy and daddy' but on the first occasion she volunteered ' we won't tell anyone about this'. I'm sure their parents are doing what they think is best for their children but the rules do feel draconian at times. Anyone else being subversive?

I would be if nonsensical rules were laid down for when I was looking after them . I spoil them when they are with me , which is what Nanas are for ! Their parents are too happy to have a break to question what happens at Nanas ! Good for you being subversive

A rule of thumb that I followed when working was 'never do anything which you can't justify to your peers'.
I think when looking after GCs the same applies.
If your sole justification for flouting parental rules is that you think the rules are misguided, you're skating on thin ice.
And the fact that your GD realises the need for secrecy isn't good either.

My 7 year old always has a cup of tea when she stays at mine even though at home mummy and daddy dont let her have one. She was also desperate to try out bubble gum. I met her half way with sugar free chewing gum which tastes of bubble gum!!

This all happened a couple of times but i felt that i was undermining her parents, so i texted my son and told him. His reply was a laugh and the words,'your house your rules mum'!!!

I have no problem with rules...but there are times when rules are meant to be broken

Luckily we are all the same page in our family - Nana's house, Nana's rules. No secrets but the children do delight in doing little things that might not be run of the mill at home.

Oh yes definitely, feed them full of sugar and e numbers and send them home -onlyjoking- . Also embarrass your children by telling the grandchildren how naughty they were. It's all good fun.

"Rules are for the obedience of fools, and the guidance of wise men."

I wouldn't do anything to undermine my daughter but on the other hand I impose some rules that she doesn't necessarily apply as much as I do e.g. table manners, bedtimes etc.

As fm77ms said they are grateful to have the "downtime" that allows them to have a social life, so they don't make too many waves these days. GS (9) is certainly allowed more latitude at our house than he is in his own, but it is only for small indulgences like being able to have a drink and a sandwich or a snack while watching tv in the living room! He is getting to the age now when having to stay with nanny and grandad is perhaps not as much fun as it used to be - his friends are miles away and we are not as active as we used to be - so we try and make his visits as relaxed as possible. (DH would indulge him shamelessly if I allowed him to). If that means throwing some of the rules out of the window, so be it. When we are at his house, however, it is a whole different ball game!

We are subversive in our house in that we actually have rules for the DGSs! They seem to like them and behave well.

Being all in the same house means similar rules apply, SIL and I tend to match but DD is just a big softy. DGS the dog, two cats and even the hamster can run rings around her.
She even went down to the corner shop to get an apple for the hamster as she felt guilty that she had eaten the last one and not given it some.

I was made to feel the draconian one last week! DGS occasionally 'explodes' after chocolate (sugar surge) so when I handed over an Advent Calendar I suggested to mum and dad that he opens the doors at teatime rather than before he goes to school. They laughed and said they were planning to get him one for after school AS WELL as well as before. To say I was gobsmacked doesn't come near it, although when I was there at the weekend there was only my calendar in evidence, so maybe they were winding me up

Maybe I am extremely fortunate but I can honestly say that in the almost 11 years I have looked after my grandchildren neither my DDiL or DS have ever given me any instructions or rules (other than times when medicines were last taken etc.)

Personally I don't think a parent has the right to lay down silly rules against watching television etc. If they want those regulations then it should be them looking after the children full time.

My GS1 was a shy baby and toddler and, because of geographical distance, I didn't see him very often. When I was with him, always with his parents as well, his way of relating to me was to come and try some of whatever I was eating. When it was my homemade flapjack or chocolate or a biscuit these were not things he was given to eat by his parents (actually chocolate was but I didnt know that). I would let him take a bite. Sometimes he would come back several times and occasionally he'd climb up beside me and sit down. Then, when the food was gone we'd get into reading stories together.

His mum watched all this and smiled. We were on the same page. We always have been. And neither of us has ever been a rule keeper for the sake of the rule. I guess that's the thing, and I know I'm lucky, but we understand each other even when we might approach things from a different angle and we each know that the behaviour of the other is led by only good intentions. Always.

In short, it's possible to respect intentions and aims without 'respecting' every detail.

I think parents who provide grandparents with loads of strictures and rules either don't trust the GPs or are just control freaks. 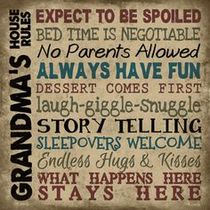 A copy of this hangs in m kitchen

Sorry to disagree with you Humbert (and others) but I think you should respect the wishes of the children's parents.

Years ago my in-laws used to collect my boys from school and give them supper once a week. I had always taken care not to give my children sweets every day so that they would have healthy teeth, etc. What does FIL do, knowing this? He stuffed them with sweets and chocolates because he said they were "entitled" to have them.

I had never said they could NEVER have them, I simply wanted to control how often and how many they had. But he used the weekly access to deliberately go against my wishes and tell them I was being cruel. I suppose he thoguht I'd never find out.

People on these pages have occasionally posted that their children have unfairly denied them access to their GCs. Those who deliberately flout their children's rules put themselves at risk of a similar fate.

felice - what a lovely person your DD must be. I hope the hamster appreciates her!

I was a very miserable child, bullied at school etc. On weekends from age about 11 my dad took me to stay with my gran. She was my solace...........we did all sorts of stuff that we didn't do at home. She saved my life with those non critical weekends and Rich Tea biscuits and Madeira cake, she was always on my side and calm and sometimes that is all a subversive granny can do.

There is much to be said for treats, and telly and just feeling the power of relaxation, we have become so controlling of children now.

When DGD was a baby we followed the rules to the letter, but now that she's a big girl (3!) we are more lax. In saying that, DD and SIL don't issue instructions these days.

Her favourite wee treat is a Pot of Joy after lunch instead of boring yoghurt! We also stock tiny ice cream cones for her, all of 25ml so hardly a mouthful really.
She does need to eat her main course first though, or no treats, same as at home.

Radicalnan - so sorry to read how unhappy you were at school and pleased that your nan was able to love and support you.

I love spoiling my DGC but do try to avoid the sweet overkill trap and am very strict about teeth cleaning when they stay. Both my DD and DIL know the rule that "what happens at Granma's stays at Granma's."

I'm with Jane10 and am also subversive in actually having house rules round here.

It's not a case of flouting parents' rules Rambling firstly my rules are clearly listed in my kitchen so parents understand where I'm coming from.

Luckily both my children and my DIL had loving grans, who allowed them a little more leeway and were big on cuddles. So they understand the different relationship between grandparents and grandchildren. They forgive me when they are returned rather mucky and muddy too.

I completely agree that grandparents shouldn't go OTT with treats to the extent it cause trouble with parents, tooth decay and sugar highs. As dizzygran .says 'avoid the sweet overkill trap' but radicalgran has highlighted the wonderful 'solace' offered by her gran and how she was always there for her.

I agree too that some of today's patents are indeed very controlling.

I would never do anything that undermined the parents of my GC. My mother did it to me and I hated it even though she had pretty much free reign as I was quite relaxed about things. My daughters and I are pretty much in agreement with what I do with the GC and if I am unsure I check with them first rather than rail roading through their wishes. My DIL would just remove her son from my care if she thought I was dismissive of her rules and I would never risk that. I want my children to respect my wishes in things and it is a 2 way street.

Fortunately our DSs and DILs seem to agree on parenting styles. Whilst, they are allowed, sweets, limited screen time etc: their parents know we would never over indulge or give them anything unsuitable. Harmony all round!

One "house rule" in our house, no mobiles, tablets, at the dining table please.
When the GC come they do get spoilt a bit, but their parents know this and dont object.

No anaesthetic: am I being a wimp?