Its only one poll but a very large one predicting a Conservative Party loss of 20 seats and Labour gain of nearly 30 leading to a hung parliament.

"Polling, after all, is difficult. It involves hitting a moving target by persuading reluctant and reflexive citizens to provide truthful responses to socially loaded questions for little or no return."

Liam Fox for leader dd? Now that is scary. Where did you read that? Heaven help us indeed.

Fox would be a gift to the left. He is such an idiot and seems to know nothing about the EU.

No i still think May will get it.

But i think that it is more optimistic for the future and the Tory brand is becoming more and more toxic, largely due to the appalling leadership since 2010. Even the gutter press are struggling to fool the people.

Ginny It was just Twitter gossip. I can't really see it, but Amber Rudd is also mentioned. She does seem to get wheeled out a lot for interviews. I think she's horrendous. She doesn't seem to have a mind of her own and is very aggressive when challenged. My nightmare would be Amber Rudd, Priti Patel and Esther McVeigh running the country, supported by the Davis/Johnson/Fox buffoons.

I don't know how anybody has the nerve to accuse the Labour Party of incompetence, considering what the Conservatives have to offer.

I disagree that Fox is an idiot, but he's dishonest and doesn't seem to know much about trade or the EU (unless his Atlantic Treaty mates stand to benefit).

The bookies odds are indicating a big win for the tories. That's people putting their money where their mouth is.

Was watching a Channel 4 news where they had a group of young (under 30s?) people and a matched group of over 60s. Was pleasantly surprised that so many of the older group was impressed by Corbyn's campaign and underwhelmed by May's.

There was a feeling last year, that despite the polls, Brexit was on the cards. Just going by the audience reaction on various TV shows and debates. Got that same feeling on TV during the Corbyn/May debate the other night.

Was that from Newsnight last night?
They asked the under 30s how many of them were buying their own house. One person!
No wonder they don't want to vote for the status quo.

What are they going to use for collateral when they get ancient and need care?

Tories couldn't care less as they only. Think short term

All politicians only think short term!!

"Another positive thing for Labour is that these projections rely on the usual levels of voter turnout, with older voters (who are more likely to vote Conservative) voting in large numbers. What these numbers can’t predict is whether the million new young voters, who are currently polling at 69% for Labour, will swing a few more seats in Corbyn’s favour. If The Labour Party can get under 25’s out to vote on a big enough scale, June the 8th may be an even bigger success story for the party than figures already suggest.

By pledging to scrap tuition fees, build affordable housing, and scrap zero hours contracts, Labour has cemented itself as being the party for young people, whilst still appealing to older voters by promising to protect the triple-lock on pensions and totally oppose the universally criticised dementia tax."

I would be truly shocked and stunned if the polls managed to predict the actual outcome, when was the last time they were right ? If they were to be believed we wouldn't be leaving the E.U, the U.S would have Clinton as POCUS and Scotland would have minni the minx as Prime minister.

Whitewave, Mayhem will be long gone by then, and she doesn't have any children to worry about. She'll probably leave all her wealth to the Tory party, a research endowment.

I want to know if she intends to tell the truth about Brexit before the election. She is still flogging the no deal lie.

Grannypiper that is why they have been running this new - and larger - form of modelling. But I agree, most of us would be stunned if any of them got it right after recent days.

They were planning to get it right by 2020. May threw a spanner in their works, too.

I would love a labour victory, I value our public services

Good - hope they are right

Can but hope but in reality my best hope is that tories get a reduced majority. If it's a landslide then I think public services are doomed. 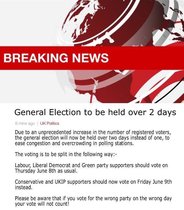 Don't forget to publicise this announcement as widely as possible.

I have told two polls now, including YouGov, that I am voting UKIP because I an cross about the Conservative care plans in order to give the party a shot across the bows. I have no intention of voting anything but Conservative.

Also, I think the newspapers who are fearful of a Corbyn victory are exaggerating the likelihood of a Labour victory to ensure the shy Tories come out in droves.

Labour's 'garden tax' which they propose to introduce once elected would see ordinary voters whose houses were worth a reasonable amount (e.g. in the south) paying a 3% tax on the capital value EVERY YEAR. Imagine having a £300,000 house and having to pay nine grand A YEAR.

Asset taxing is the great, secret danger of voting for Labour under Corbyn. Many of the people who are thinking of voting for the party have no idea that their house equity will be sucked away from them as Corbyn is trying to keep it quiet for now.

Many of us were dubious about the Oven Ready best ever deal ..

When did you start feeling old?

Are you still wearing a face mask?