Boris is up in Scotland today 🏴󠁧󠁢󠁳󠁣󠁴󠁿

“Speaking ahead of the visit, Mr Johnson said: 'When I stood on the steps of Downing Street one year ago, I pledged to be a Prime Minister for every corner of the United Kingdom.

'Whether you are from East Kilbride or Dumfries, Motherwell or Paisley, I promised to level up across Britain and close the opportunity gap.

'The last six months have shown exactly why the historic and heartfelt bond that ties the four nations of our country together is so important and the sheer might of our union has been proven once again.'”

Will his visit be a success or is the SNP too close now to going it alone?

Who knows?
Perhaps his ratings will go up if he does a highland fling dressed in full clan tartan.😁
A poster from Scotland will soon be along to tell you. 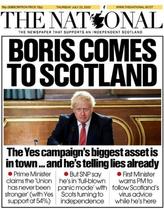 He is going to Orkney, as far as I know, where the photo will no doubt be doctored to look as if huge crowds welcomed him. I think he must fear the independence movement to be making the trip ( even saying it’s the strength of the union which has saved us from Covid19, nothing to do with the Scottish Government), but I doubt it’ll woo the Scottish people.

I have voted SNP since I was of age but I cannot see the logic in being “independent” but subservient to the European Union.

We're NOT subservient to the EU Espee they have control over a very small % of laws,usually ones the UK voted FOR as everyone gets a say.In the UK "UNION" thats not the case,WM has 80%+ say over us and as England is the country with the biggest number of MP's THEY get what they want and we can go hang...except when it comes to pillaging our recources.Of course we could join with Nordic Countries who have said they would welcome us and we have had much in common with them so that could work .We would certainly be treated more as equals than we are by WM who will cut the number of Scottish MP's AGAIN making it impossible for us to ever get anything through parliament ...and thats before you count EVEL that doens't allow us to vote on English matters bit lets them vote on matters that affect us .I've been a supporter of Independence since 1967 when Winnie Ewing won Hamilton and I hope that she is around to see the Independence that was her dream

For years before becoming PM Boris has been disparaging about Northerners and Scots. Why should we believe him now? Much as though I wish the SNP well an independent Scotland probably would not be viable. Northern Ireland on the other hand could join the Republic if they and the Republic want it.

According to the news Nicola Sturgeon is more popular than Boris in Scotland-I wonder why? I think there is a distict possibility that most of the UK would think the same! A warm welcome in Orkney.

That really would prove that he is a patronising idiot and totally out-of-touch! (As proved by his suggestion that a Scotland/ NI bridge is any sort of priority.)

A visit from BJ is sure to boost support for independence.

Mind you, when has any PM in recent years been welcomed warmly in Scotland?Or any years.

I own up I’ve never previously been a fan of Nicola Sturgeon, the SNP or Independence but the way she’s handling the COVID-19 crisis and speaking directly to the people is impressive. I’ll certainly listen more to her views and reasons for Independence more closely in the future and she’s probably now got my vote.

Will you keep him up there and perhaps feed him to Nessie or something. I can’t stand him.

It seems that those who want to destabilise the West are winning - not just by lying and cheating their way to a disastrous brexit, but also by doing everything possible to break up the UK.

According to the news Nicola Sturgeon is more popular than Boris in Scotland-I wonder why? I think there is a distict possibility that most of the UK would think the same!

I'm sure she is.
However, I like her even less than I like Boris and that's saying something.

“Och aye, it's the New Jerusalem!” he writes. “It's a land of milk and honey they're building up there in Scotland, laddie. They'll nae be doing with your horrid Anglo-Saxon devil-take-the-hindmost approach. No, they're just more socialist than us sour-mouthed Sassenachs. “They want to spend on the puir wee students, provided, of course, that they are poor wee Scottish students, not English ones. They want to shame the tightwads in the Treasury by spending on the puir wee Scottish teachers - in fact, they've given them a pay rise of 21.5% over the next three years, far more than the English teachers are getting. “And now, just to show how much generally nicer they are than the English, they have decided to spend, spend, spend on the puir wee old folks who need someone to help them open a can of beans.”

Boris Johnston writing in the telegraph 2001

I own up I’ve never previously been a fan of Nicola Sturgeon, the SNP or Independence but the way she’s handling the COVID-19 crisis and speaking directly to the people is impressive. I’ll certainly listen more to her views and reasons for Independence more closely in the future and she’s probably now got my vote.

I think she is doing a great job. I respect her, particularly how she refuses to be pushed into badmouthing Boris.

That's just the point though. The EU isn't an organisation of equal partners. It likes to portray itself as this benign group of like minded nations but in reality the financial contributors hold all the cards and make all the decisions, well two do in total reality!! Ask the Dutch, they can tell you all about being over ridden in more ways than one!. Sure the recipients have a say, but are frequently brushed aside by the big players, obviously with veiled threats to their finances which they heavily rely on the wealthier nations for and are in debt over! The powerful countries make sure of that! Scotland will be recipient and will have to obey the big boys, Independence is managing your own affairs without interference from others, not going from one dependency to another!

but in reality the financial contributors hold all the cards and make all the decisions, well two do in total reality!!

You're never going to believe that the UK was up there with 'the two'. But we were.

Or that, by not being in the euro, and never intending to be, we had far more control of our finances than players in the eurozone.

Still, come 2021 we're going to find out the hard way just what our spurious 'independence' will mean...

While Boris's attitude towards Scotland and its people has not changed since 2001, (Today's example, his failure to notify the First Minister of his visit to Scotland) his power and influence has now reached it's Zenith. He intends to take back powers currently devolved to the Scottish Government, and to rule the UK as one Nation. This he could now do because of his large Tory majority at Westminster and with no need to abide by EU rules on subsidiarity. He presents this as being to Scotland's advantage, but the real reason is to keep Scotland's wealth in terms of power generation, self sufficiency in food, e.g. fish. excess water supplies, and still the biggest oil fields in Europe. As attested to by many GN posters, Scottish Voters are converting to the SNP in droves and support for Independence is at an all time high of 54% and rising. Polls have also shown that a majority of English Tory voters would love to cast Scotland adrift, thinking that this would save RUK a lot of money (they are sadly misguided of course).