Holding - July book of the month 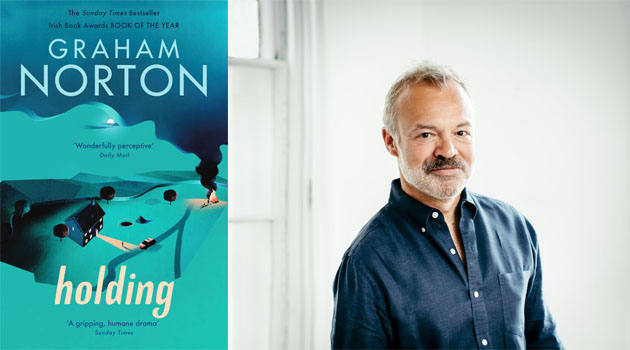 Our book club choice for July is the surprising, compelling and gripping story by Graham Norton, heralding a bold new voice in fiction. Holding is his debut novel full of dark humour and emotion.

Everyone is holding onto something. A lost love, an old regret, a deep secret.

Duneen is a quiet place, far enough from the big towns to have kept its own rhythms. Its residents include cast down policeman PJ who lives a lonely, uneventful life punctuated only by the next meal (until now), the beautiful and mysterious family of three spinster sisters each with their own secrets and sorrows, and, of course, the town's gossip who think she knows the answers.

When a grim discovery is made on a building site up by the old school, it becomes the catalyst for half-lived secrets and seething rivalries to come to light and this silent, once innocent and repressed town is revealed to have a much darker, hungrier undertow.

Sergeant PJ Collins is holding back from getting close to anyone...but his new case will force him to make a connection.

Evelyn Ross is holding on to a long lost love until a sudden revelation may mean it was not lost at all.

Brid Riordan is holding down her marriage...just so long as there’s a glass of wine at the end of the day.

Elizabeth Meany is holding off from revealing the darkest memory of her past...but the discovery of a body means she can no longer keep her secret.

Graham Norton is one of the UK's most treasured comedians and presenters. Born in Clondalkin, a suburb of Dublin, Norton's first big TV appearance was as Father Noel Furlong on Channel 4's Father Ted in the early 1990s. Since then, he's secured a prime time slot on Channel 4 with his chat shows So Graham Norton and V Graham Norton and was later approached by the BBC to front his own self-titled chat show The Graham Norton Show in 2007. He has won seven BAFTAs, presents a show on BBC Radio 2 every Saturday and also writes, as Agony Aunt, in a weekly column for The Telegraph.

Holding is published by Hodder & Stoughton and is available online and from all good booksellers.

Please note: if you receive one of the 50 free copiesyou will need to add your questions and comments for Graham to the thread (coming soon!) by the end of July.