Not just Boris then! 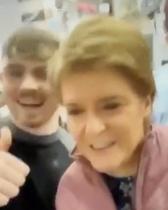 So ... Nicola Sturgeon was reported to Police Scotland on Sunday for breaking her own mask laws, a breach that could result in a £60 fine, reduced to £30 if paid within 28 days.

Only hours before Saturday's visit to the barber shop in East Kilbride, the SNP issued a press release in which she urged Scots to vote for her party on May 5 "if you are as outraged as I am about the Prime Minister's contempt for the law."

Oh dear.
While she too be asked to resign?

I don’t envy the heckling Ian Blackford from Skye will be subjected to when he stands up n the HoC.

It's a bit different (forgetting your mask for a few minutes) to lying about parties - or being, apparently, unaware that you're even at a party!

Agree with you Hetty, and there are lot more fines to come with Johnson

Allegedly being part of 12 parties/gatherings trumps whipping a mask off for a few minutes, I would say.

I gather the photo was taken by the man she shaved. It's not really worthy of press coverage as it an unguarded moment. Still they should stop going on about such things. It's time to move on.

More than a tad hypocritical, she has been caught bang to rights! She did the same before Christmas but was let off with a reminder of the rules that time. She too is a rule maker & rule breaker it seems.

Actually I was surprised that in the barbershop she didn’t remind EVERYONE that masks should ought to be worn. There were 10 people crowded round.

She did wear a mask for the press photo while she shaved a customer’s face but a bit later, was snapped by a member of the public, cross at her disregard - and it wasn’t ‘just for a few seconds’ either.

Such glee Ug. I am touched by your concern for Ian Blackford. Still the PM has set the tone of nothing to see here so all will be well for the FM.

The photo wasn’t taken by the man being given a shave. Actually scrub that, after the shave when the press had left and NS had removed her mask whilst still in the shop, he might have taken one too. There was a group - all maskless.

Maybe Boris & Nicola could offer to resign together?

I’m not a fan of Nicola Sturgeon by any means, but I don’t think forgetting her mask for a few minutes compares to the many aspects of partygate. Apparently Ms Sturgeon was on a walkabout outdoors when she was invited into the shop. She had forgotten to put her mask on and a few minutes later she did so after being reminded by one of her entourage that she hadn’t done so. Someone in the shop filmed her entering without a mask and immediately reported it to the police - ‘gotcha’ !! Petty, some might say - I couldn’t possibly comment.

Is she repeatedly lying about it to parliament and the media?

Hey - Are they going to fine all the others in the shop too? No one else is wearing a face mask. And it is for this reason that Prof. Leitch’s explanation is not plausible at all (seconds only). The pictures coming out in the press today show clearly that no one was adhering to the rules - including the First Minister. It wasn’t a mistake!

The press have been trying to catch Nicola mask-less since the pandemic started. This was not an arranged visit, she was campaigning in the street when asked to pop into the Barbers and forgot, for a moment only, to put her mask on as she stepped inside. This is something I have done on numerous occasions - soon rectified.

I have been puzzling ever since I saw this on the news as to how Barbers can shave customers who are wearing their masks. I know this is a red herring but I am sure there are a few jokes to be made about this situation.

Bit weak um can’t you do better at defending the indefensible hardly equates to a dozen parties does it ?
Stop trying to protect the liar doesn’t do you or him any favours you know the old saying Two wrongs don’t make a right

It’s nothing to do with me, I don’t live in Scotland so I’m not affected. What Nicola Sturgeon does is between her and the Scottish voters, and if thought right to do so, Scottish police.

Och Urmstongran, you're like the coo's tail. And Aveline's at least consistent

The person who reported her is the former treasurer of the Moray Conservatives, who was suspended for making jokes about Sturgeon’s miscarriage and who was about 150 miles from the barbers at the time. She’s a wee bit…shall we say, obsessed? And awful pleased with herself.

If the police find laws were broken, Sturgeon should pay the fine. But first, we’ll have to wait 2 years for an enquiry, then we'll have a civil servant investigate, then we’ll be told its old news. Oh no, wait a minute….

Didn't bother to check who the OP was. Utterly predictable from the subject.

I went into a craft shop on Saturday and forgot to put my mask on for all of 10 seconds. I'm expecting the Black Maria to turn up any minute and the polis at my door. Oh, the shame.

While she's being questioned perhaps they can ask her if the missing 600,000 pounds of SNP funds have turned up yet. Dodgy dealings by the SNP.

The police have spoken to Nicola. "The force added it was satisfied that no further action was necessary. "

www.bbc.co.uk/news/uk-scotland-61142777The force added it was satisfied that no further action was necessary.

Right everyone, I want to ask a question and maybe this thread is the right one. I have heard enough without getting an explanation.
What exactly has Nicola Sturgeon done to make her roundly disliked on here by some. I live in Scotland, am English but have only seen a straight talking intelligent woman for whom I do not vote but see no reason for such negativity directed at her.
I object to the remarks she gets on this thread especially when the complaints are coming from south of the border and with no explanation or back up with facts. Maybe they know more than they are letting on.
I mean it, please enlighten me. I repeat I am not an SNP voter but I object to the rudeness on here regarding someone whose only real problem for others, as I see it and I await the truth about her, is being a woman. I need to know genuinely what is the problem?
Thanks everyone.

I've no agenda about Nicola S or any politician here, but I think it shows how easily we are drifting back to our previous behaviour without thinking.

I’m Welsh TopsyIrene06, and not involved in Scottish politics at all. This particular post is an attempt to defect from the UK government, to make out that Nicola Sturgeon accidentally forgetting her mask for a few seconds as she walked in from the street to a barbers is the same as the Partygate saga.

My take on it is that a particular few staunch Tory supporters dislike Nicola Sturgeon for being a strong woman who doesn’t take fools, and stands up for what she believes in. Underpinning it the is perception that England rules the UK, and the other nations should not be allowed to govern themselves. What grates on them most is that the national leaders are seen by a majority in the countries they lead as more effective than Boris. So, you regularly see transparent attempts to goad Scottish Gransnetters in particular, by people who don’t live in Scotland, or really have the knowledge to argue the detail. It’s much better when people who live there and are directly involved have an informed debate, because when they don’t agree they do at least know what they’re talking about.

Thanks for spotting my consistency volver! Yes there are many aspects of NS and her government with which I'm profoundly dissatisfied as you know.
It was always rather chilling that SNP members all have to toe the line and never (publicly) disagree with the party line. The obfuscation when dealing with legal requests : delays and redactions ++ always a worry. The shocking judgement shown in so many fields from legal payments re football clubs, the colossal debacle re the ferries , the lowest life expectancy in Europe etc etc, och I could go on and on but the fact that she employs 175 spin doctors at a huge cost to the Scottish tax payer says it all. Who's at the top of this? Who's the sickeningly self pronounced 'chief mammy'? Why Nicola Sturgeon of course, queen of the selfies. Fed up? Moi?