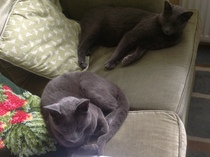 I know some of us on GN are rather fond of cats so I thought I'd start a thread (my first!) about my new cats.

We lost our 5.5yo cutie-pie, Willow, in April. She had a congenital heart condition and we knew she was unlikely to have a long life but even so, I was heartbroken.

We thought at first that maybe we wouldn't have any more pets but then these two boys came up and they moved in and took over on Sunday.

They are Russian Blue brothers, 8yo. Their owners have moved to Korea and couldn't take them.

They're behaving as if they've lived here all their lives! They're militantly affectionate, when they want a stroke or a tickle, they stop at nothing to get one. There was a massive fight literally with fur flying on Monday, which I imagine is down to territory and dominance issues, but it's been peaceful ever since. We haven't had lap cats for years but these two are going to keep us warm this winter, I think.

They are absolutely adorable and their fur looks so dense, lovely boys. What are their names? 😻

Their fur is like velvet, it's short and so thick! We've named them Leo (at the front) & Felix. My Dh keeps calling Felix 'she' so I hope he doesn't have an identity crisis.

Hope you have many years of affection from Leo and Felix.

They`re beautiful Sue, our first ever cat many years ago was a blue, but he was a beautiful accident, his mum was a tortoiseshell very similar to Soop`s Bracken.

Sue, they are very handsome boys. I adore cats, and have 3 males and one female. I know you will enjoy them and they seem to have made themselves right at home!

Lovely boys! You can look forward to long winter evenings with cats on your lap. Perfect.

They're beautiful! Sounds like they've found a lovely new home too.

They look beautiful and very much at home already. Just as well they are going to be lap cats or you wouldn't get a space on the sofa!

Thought I'd show you mine

They are beautiful, yours too Nina. I have two brothers and an older lady. Cats are wonderful creatures. Will you let them go out or will they be snuggled up at home? Congratulations x.

My D has recently adopted the mother of her two cats, she was a flat dweller and had never been outside. She soon took to sitting by the back door with the other two and now can hardly be kept in , she loves outdoors.

Oh you are so lucky to have found such beautiful cats. My parents had a 'blue' when I was growing up,and she was gorgeous. Name, Smoky, but always called Pud or pudding.

. I get my fix of cat love when visiting our DD, he puts his arms around my neck and dribbles on me 😝

I am envious Sue. I always wanted a blue cat but never had one. When I used to walk my daughters to Primary school there was one who sat on a gate post waiting to be fed crisps, cheese etc. by the children from their packed lunches!

I love cats, have a black tipped and a blue BSH. So affectionate, you're never alone, great companions, they sense your moods too!

Thank you for all your lovely responses!

That is one pretty cat, Ninathenana Is it a boy or a girl?

They are indoor cats, they've never been outside, apparently. Neither of them has shown any interest in going outside, they've not gone to the front or back doors at all.

It was very warm here last night and the big one insisted on snuggling up to me. I was swelteringly hot with his 12.5lb body radiating heat onto me!

SueDonim you have acquired two handsome boys and they look as though they have been living with you for many years- they are well settled.

That fellow wanted a bit of company- it is a long night! You will appreciate his warmth mid January!

Nina your cat looks lively, what is his/her name? 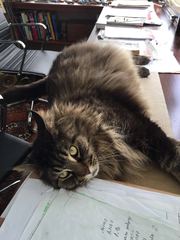 I hope your Felix doesn't turn out like this one!
www.youtube.com/watch?v=Tkc8jG2v9Pg

What gorgeous cats you are very lucky. I love cats and have always shared my home with them until are last two long lived cats died 3/4 yrs ago. One was 19 and one 20+ and were much loved but we decided not to get anymore pets as it was going to be a tie once we both retired. We love being able to just pack up the car and leave without having to consider arranging car for them.
I do miss having cats around the house though and we are lucky that 3 neighbours cats seem to love spending time in the garden so I have to content myself with the occasional contact with one of them.

Suedonim (love the name)
She is a fourteen year old rescue cat. We've had her 11 yrs.

My beautiful blue cat died 5 years ago aged 20 and I still miss him. Your two are gorgeous and I'm envious!

How would you get MPs to focus on their jobs not sex?